You are here: HomenextNewsnextBlognextIt's A Knockout! 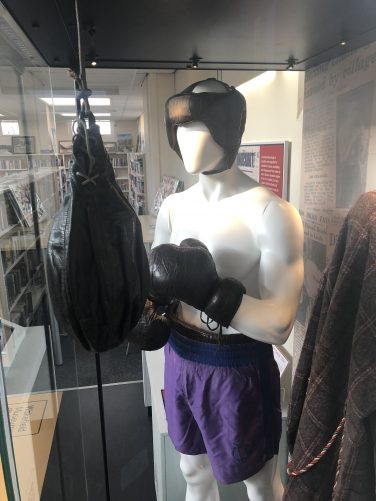 zoom
The new 'It's a Knockout' display.
Wakefield Libraries 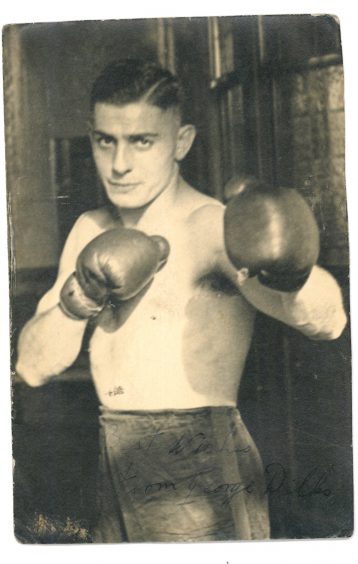 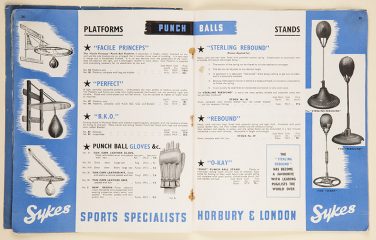 zoom
Boxing equipment advertised in a Skykes catalogue from the museum collection.
Courtesy of Wakefield Libraries

At Wakefield Museums we have redeveloped our museum hub in the town of South Elmsall to celebrate the boxing heritage of the area.

Our ‘museum hubs’ are display units set up in areas of the district furthest from our main museums. They consist of regular changing displays often co-curated with members of the local community. This hub is based in South Elmsall library and has recently been re-launched with the ‘It’s a Knockout’ boxing display.

The small mining town of South Elmsall has given rise to a number of successful boxers, one among them was William ‘George’ Dilks (1928 – 1992). George was born and bred in South Elmsall and worked all his life at nearby Frickley Coillery. He took up boxing as a young man after being spotted by promoters who offered to train him up. He went on to become North Central Area Middleweight Champion in 1948/49.

With support from his family who still reside in the town, the museum hub was redeveloped and the ‘It’s a Knockout’ display was launched in early 2019. The display features George’s boxing kit and equipment kindly loaned by the family, as well as a digital roiling display of images from their private collection and the museum’s own photographic archive.

The display can be viewed during South Elmsall Library opening times which can be viewed here: http://www.wakefield.gov.uk/libraries-and-local-history/your-local-library/south-elmsall-library