June 2016 – I ventured to the first major footballing championship (men’s) that Wales had qualified for in my lifetime: Euro 2016. As a mother in my late 30s, despite having promised myself that if we ever managed to qualify whilst I was on this earth that I would go, the reality of negotiating time away from young children and the financial implications almost stopped me in my tracks. 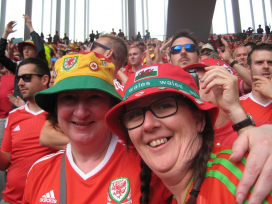 However, a last-minute trip to Toulouse to catch Wales’ final group match versus Russia led to a fortuitous conversation and a spare ticket! Despite a largely convivial conversation, I was questioned as to why I was not at home with my children (enacting my prescribed gendered role as a mother), and why wasn’t my husband there instead.

Though I had been out of footballing circles for a while due to life circumstances, in 2016, I wasn’t expecting such questioning of my presence. A personal footballing journey has since become an academic one, as I have begun to explore the experiences of fellow Welsh female fans, by:

Via oral histories not only are the experiences of the female contingent who travelled to France captured and foregrounded for future generations, but they provide an important step in providing representation for women and redressing invisibility in football fandom

Whilst we have a long way to go in further diversifying and celebrating other non-hegemonic groups in our fan base, this is a first step on that journey as we hear from fans whose support dates back to the 1980s; the pain of qualification near-misses; but also signing the anthem at Wales’s opening game in Bordeaux; and the intercultural experiences that debunk the stereotypes of rival fan bases, from partying with random Swedes, to taking photos with Russians.

And you can hear more from Dr Penny Miles in this interview recorded for #NSHD2021. Presenter, Sioned Dafydd chats with Penny about her research and her own time in France: