You are here: HomenextNewsnextBlognextFootball Boots Worn by John Aldborough 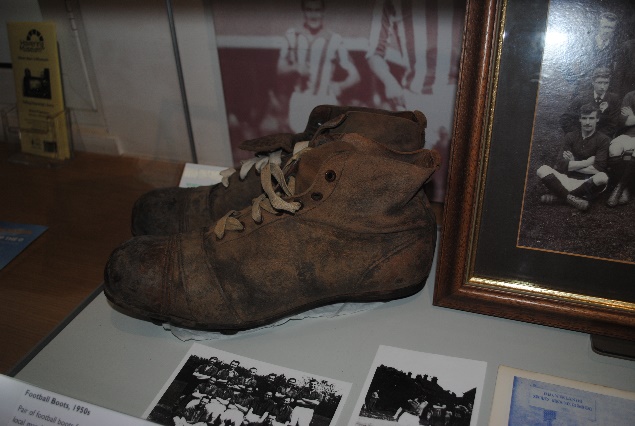 Two of our work experience placement students both chose the football boots on display in Gallery One as their favourite object. Here are two very different perspectives on the same item.

The boots resonate with me as a football fan who has a keen interest in local clubs. The current Romford FC all-time leading goal scorer is also the brother of a very good friend of mine. To see local sports being celebrated is fantastic, even though the old Romfordians were not a top club, it’s good to see the efforts of local boys being rewarded and remembered. Also, I retain a keen interest in the history of football, so to see a pair of the kind worn 60 years ago, in comparison to the ridiculous, over the top boots players use today is an eye opener.

Celebrating ‘lower level’ local sports teams accomplishments is the reason I mainly enjoy the boot on display in the sports and recreations case.

In the Museum, are many items which capture my eye. Each object dares me to know more. However, among the varied artefacts, my favourite object is the pair of football boots worn by Johnny Alborough in 1952. Though haggard and worn, these boots stand with pride and prodigy, as if the legendary blade soaked in the blood of Lucifer, with crimson ravines teaming from its vivacious steel. Scars and cuts are marbled on each boots leather, representing the bravery of the one who possessed these potent weapons of ruthless dominance. Johnny Alborough managed to score 53 goals in only 24 games. Evidently, he was one of the best of his time.

Despite this, the fascinating point is, that as Johnny Alborough scored his goals, and did what he loved, he was oblivious to the script that he was writing, he was unaware that he was the artist of his own legend, that one day, someone like me 64 years on would write about him.

This article was originally published on the Havering Museum blog.