Ron Berry and the Art of Sports Writing

So Long, Hector Bebb is a 1970 novel by late Rhondda author Ron Berry (1920-1997). It focuses on the travails of the titular Cymmer boxer Hector and is a dark, visceral account of post-war working class valleys life as much as an account of the boxing industry.

After being sanctioned for unfortunately killing an opponent in a bout, Bebb eventually returns to the ring but his professional rehabilitation is undermined when a love rival dies at Bebb’s hands. The crowd’s thirst for violence justified the former death; but the latter death in a local pub marks Bebb as an outcast and he goes on the run in the hilly, rugged wilds of the Glamorgan uplands.

In his foreword to the re-published Library of Wales version on Parthian Books, Liverpudlian writer Niall Griffiths describes So Long, Hector Bebb as a “terrifying” novel and one of the greatest of the twentieth century. 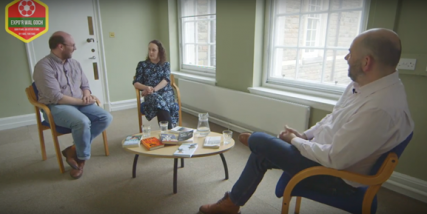 As part of February’s Art of Sporting Heritage Month, Russell Todd from Expo’r Wal Goch, the Welsh football social enterprise, was joined by Dr Sarah Morse from the Learned Society of Wales, and Dr Daryl Leeworthy, Rhys Davies Research Fellow at the South Wales Miners’ Library, to discuss the significance of football and other sports in the fiction of Rhondda writer Ron Berry (1920-1997).

Berry was a keen sportsman and athlete himself: the ‘Tarzan of Treherbert’ as one friend affectionately put it. He was a bodybuilder, avid and competitive cyclist, swimmer and local authority lifeguard, and a decent enough footballer to attract the attention of Swansea Town before injury put an end to his career.

Few Welsh writers have had such a keen eye for the everyday life of working-class communities, where sport so often plays a central role, and their collective imagination. As well as boxing and football, the likes of swimming and cycling all appear in Berry’s writing, alongside a fascination with the natural world: pigeon racing in the short story Time Spent, bird watching his non-fiction ‘diary’ Peregrine Watching, and the less savoury foxhunting in November Kill.

Dr Daryl Leeworthy is the Rhys Davies Trust Research Fellow at the South Wales Miners’ Library, Swansea University. He is the author of Fury of Past Time: A Life of Gwyn Thomas (2022), Causes in Common: Welsh Women and the Struggle for Social Democracy (2022), Elaine Morgan: A Life Behind The Screen (2020), A Little Gay History of Wales (2019), Labour Country (2018), and Fields of Play: The Sport Heritage of Wales (2012). He is currently writing a cultural history of American Wales.

Dr Sarah Morse is Policy and Public Affairs Manager at the Learned Society of Wales where she is also the staff lead for Wales Studies. She is Chair of the Board of Directors of Seren Books and Treasurer of the Association for Welsh Writing in English. In 2010 Sarah successfully completed her PhD entitled The Black Pastures: The significance of landscape in the work of Gwyn Thomas and Ron Berry, and in 2020 co-edited (with Dr Georgia Burdett) Fight and Flight – Essays on Ron Berry.

Russell Todd has had a career in excess of twenty years in community development primarily in Wales. He now works as a freelance community development consultant and podcast producer. He is also the co-founder of footballing social enterprise Expo’r Wal Goch, that hosted its inaugural Welsh football Expo online in June 2021, as well as a director of Grow Social Capital CIC and Valleys Ale Trails