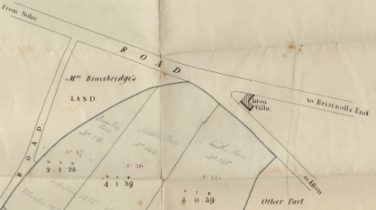 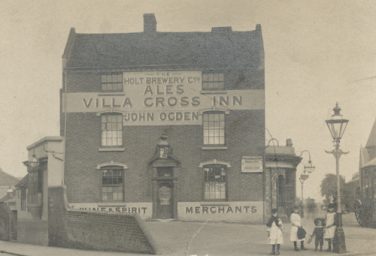 zoom
The Villa Cross Inn at the junction of Villa Road and Heathfield Road.
Courtesy of Birmingham Archives and Collections, reference wk-h5-133

One of the Tuesday Lunchtime Local History talks in 2012 was on the history of Aston Villa Football Club. At the end of the talk the question was raised as to the precise location of the villa which gave its name first to a district in Aston, and then to the Wesleyan Chapel whose members formed the football club. It was suggested that there was a map in existence which gave this information.

This was a challenge which I could not resist, despite being a supporter of the opposition. In the event the map proved relatively easy to find, simply by working my way through the various early 19th century maps of Aston to be found in Birmingham Archives & Heritage.

Where is Aston Villa?

J.E. & C. Robins map of 1820, clearly shows Aston Villa at the junction of the roads to Bristnall’s End and to Aston, known today as Villa Cross. It also shows that Aston Villa was actually in Handsworth!

The Handsworth rate book for April 1837 and the Handsworth Tithe Apportionment  of 1843 both confirm that at those dates Aston Villa was owned, although not occupied, by Richard Blood, a factor from Birmingham.  The occupant in 1837 was Charles Perry, whose daughters, Elizabeth and Emma were, according to Pigot’s Directory of Birmingham 1833, running the Aston Villa (Boarding) School based there. They had taken this over some time around 1832 from a John Skally who had moved his own school there from Caroline Street in July 1825. By 1849 however the house had become the Villa Cross Inn, which the rate books for 1866 show as still being owned by the Blood family.

Showell’s Dictionary of Birmingham (1883) and a report in the Handsworth Herald dated 21st June 1907 both confirm that the Villa Cross Inn was originally known as Aston Villa School. An early photograph of the Inn suggests that this could indeed have started out as an early 19th century villa type house suitable for a boarding school and so could well have been the original Aston Villa.