You are here: HomenextEventsnextThe Art of Sporting Heritage MonthnextThe Bluebirds - Red to Blue

The Bluebirds - Red to Blue 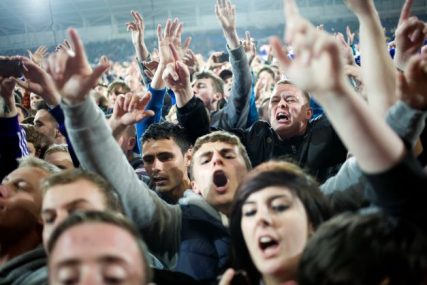 Ahead of my exhibition ‘The Bluebirds’ at the Workers Gallery, Ynyshir, South Wales (February 2022) I have been reflecting on my photography project that was initiated to record a significant historical event for Cardiff City FC but has grown to a long-term documentary of the fans.

In August 2012 I was commissioned by the German football zine ’11 Freunde’ to make a photo report of the inauguration of the new ‘red’ kit at Cardiff City Stadium. Cardiff ‘Bluebird’ fans were expected to protest the new ‘red’ re-branded kit just before kick-off. The protest never materialised so instead I made a few images in the pubs around Canton, Cardiff.

I worked together with Titus Chalk, a journalist whose words I was illustrating, interviewing, and photographing (both ‘blue’ and ‘red’ fans). At the match I met Annis Abraham Jnr., a publisher and writer with whom I exchanged details. I didn’t realise this meeting would be the beginning of my long-term adventure with Cardiff City FC.

I became a fan in 2012. I can’t stop thinking how lucky I was as a photographer to have been able to witness and record events for future generations. There is one thing I know for sure …I’ll be there, surrounded by my fellow fans, with my camera to document it for a long time to come. BLUEEEEEEEBIIIIIRDS!

Dr Bartosz Nowicki is a Polish photographer, storyteller, curator, and researcher based in South Wales. His photobook City- The Season ‘…Is not a story of the club but of the people who support it’.