You are here: HomenextNewsnextBlognextFootball Fever at the Natural History Museum! 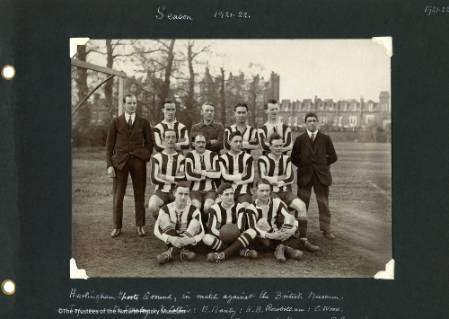 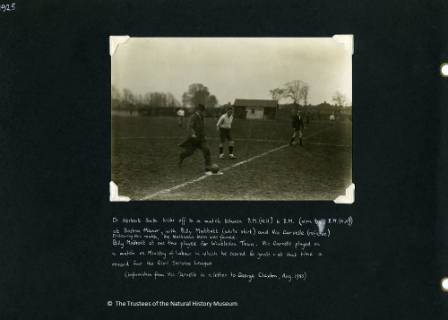 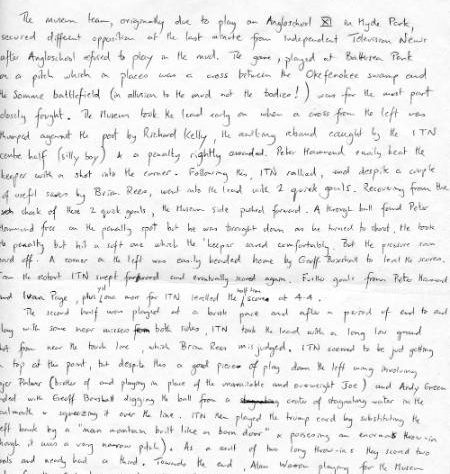 The World Cup of 2014 triggered an outbreak of football fever amongst some of the staff at the museum. With perfect timing, the museum archives had just catalogued a treasure trove of sporting memorabilia relating to the museum’s very own sports clubs.

There are some wonderful images of museum footballers through the ages, and some are reproduced on this page.

These reports of Natural History Museum (NHM) disasters triggered nostalgia in some of our staff. They felt the match report painted an unfair picture of the team’s prowess, and commented:

We weren’t the worst team ever – sometimes we even won! I seem to remember our biggest win was against the Museum of London. The score was something like 24-3 to us! The match was played in the pouring rain on a pool of mud. Our captain at the time wanted us to get out early, get warmed up and not hold proceedings up, so we went out and promptly got wetter than wet! Except for Mick Webb, who organised the match and stayed in the dry until the last minute, as did the opposition. At that time we had cotton shirts which simply soaked up the rain, so it was difficult to run when carrying the extra weight of the shirt. The sleeves expanded downwards so that we probably had something of a Neanderthal appearance. Nonetheless we racked up goals. We even gave them some of our players to make a bit of a game of it. In the end our players scored all ‘their’ goals.

On the other hand, they both agreed that back in the 70s and 80s:

We played seriously but only occasionally, and it didn’t matter whether we won or not. We always avoided playing in leagues, as that allowed an element of rivalry and win at all costs to creep in; we preferred friendlies against similar organisations.

So it’s not the winning that really matters – it’s the taking part that counts. England fans take note!

This article was originally published on NatgurePlus, the Natural History Museum’s Blog.