13 Players and a Poet 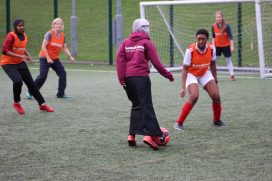 One consolation of the Covid-19 lockdowns was being able to “attend” last year’s Sporting Heritage online conference from home. The conference promoted the power and ease of short films to share sporting heritage, along with calls to capture more stories from minority groups, which inspired me to put a bid in immediately for a Sporting Heritage Community Grant to make a film capturing stories from the diverse women’s football group I work with.

The bid was successful but was swiftly followed by the long winter lockdown which made
community engagement particularly difficult. I captured this great ‘football journey of Michelle Garrigan’ by Zoom during lockdown: but most of the interviews were delayed until
summer 2021.

We asked the same questions about positive and negative football experiences to 13 attendees at the women’s football sessions run by Football Unites, Racism Divides (FURD) in Sheffield (imagine my relief when they agreed to be interviewed on camera!) The interviewees are diverse in ethnicity and range in age from 18 to 60.

It was interesting to compare the responses of players. While it’s not a scientific study, I was pleasantly surprised by how few barriers were reported by some – not all – of the younger interviewees, but then they are playing with an explicitly anti-racist organisation whose remit is to remove barriers where possible. I hope it will encourage more women to get involved.

The film was made for FURD’s Stoppage Time project to research and celebrate the history and
development of women’s football in Sheffield and Rotherham.

For more information about this film and project contact ruth@furd.org