You are here: HomenextNewsnextBlognextFootball’s Black Pioneers 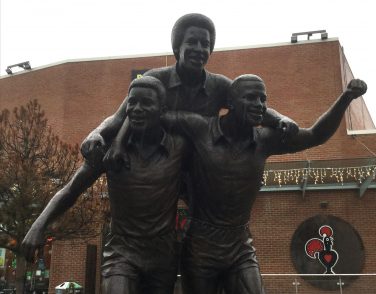 In 2016 we set out to commemorate the first black player at each of the 92 Football League clubs. In many cases the names of these pioneers were being lost to history. Four years later it is apparent there has never been a more important time to recognise these trailblazers.

Each player’s story is different but, collectively, what emerges is a far wider social history about the black British experience over the last 130 years, a history that touches on everything from slavery to Windrush and to black lives matter. We found racism, prejudice, and the loneliness of going where others have not yet been.

Some names will surprise even the most stalwart fans. Tranmere Rovers, for example, had a Nigerian player, Elkanah Oneyeali, who made his debut in 1960. But Elkanah was preceded by George Payne who played 467 games in goal from 1947 and George himself was pre-dated by his cousin, Albert Payne, who first played in August 1946. Neither George nor Albert looked black but both were grandsons of a black man from Barbados who settled in Liverpool in the 1870s.

Several of football’s black pioneers are commemorated by statues: Walter Tull at Northampton Town; Brendon Batson and Laurie Cunningham at West Bromwich Albion; and soon they will be joined by Jack Leslie at Plymouth Argyle. In one of the most shocking stories in the book, Jack was selected to play for England in 1925 but dropped when the selectors belatedly realised his father was black.