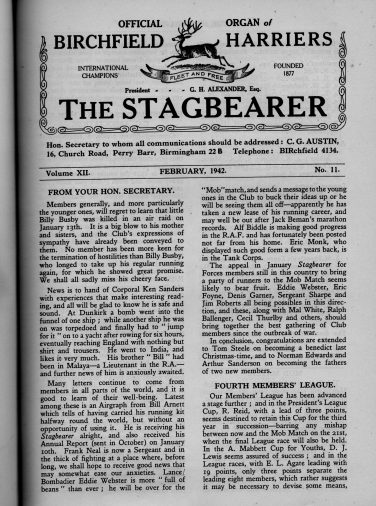 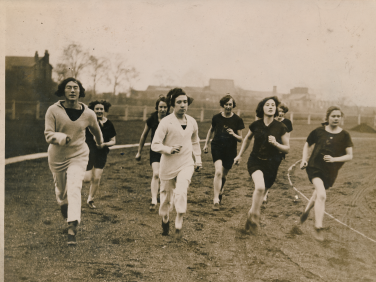 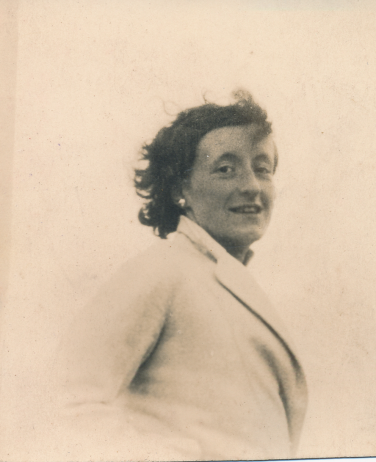 One of the first amazing collections we received information about through this project’s scoping activity was from Birchfield Harriers – who have a rich history dating back to 1877. Wow, how awesome is that? I know when I watch athletics on telly I often hear the name Birchfield Harriers and in their illustrious history they can boast 100 Olympians, Paralympians and Deaflympians.

Many Birchfield Harriers served in World War II but the club has no memorial which commemorates their service. Fortunately, the club magazine, ‘Stagbearer’ carried news of their letters home and documented deaths, injuries and athletic achievements as well as carrying news from Prisoner of War camps – a wonderful resource! (1942 edition pictured right). The Club is now collating a list of members who served in the armed forces so that they can be remembered.

In recent years, various parts of the collection have been on display when there have been athletics meetings at the Alexander Stadium in Birmingham, and much of the work that has been done to document the club’s history can be found here: archive.birchfieldharriers.com. Many items can also be found at their clubhouse.

The club has an extensive archive which holds relevant documents and memorabilia from over 140 years of the club’s history. Highlights include a medal from the 1936 Berlin Olympics, as well as lots of material from key female athletes in recent history such as Kelly Sotherton, Denise Lewis and Katherine Merry.

Birchfield Harriers have done a lot of work in trying to document the history of their club and their website has managed to bring to life so many successful and famous athletes that the club is so rightly proud of. They also have a fantastic photo archive – a couple of examples of which can be seen here.

One such athlete was Dorothy Neale (later Nelson-Neale). Dorothy was a high-ranking member of Birchfield Harriers, and a respected athlete, coach and official. She is recognised as the first female to coach a female athlete to a World Record, having been the coach of Diane Leather when she became the first woman to run the mile in under five minutes. She had a stand named after her at the Alexander Stadium in Birmingham.