Making the 'Battle of the Bathsmasters'

For National Sporting Heritage Day 2021 the Arlington Baths Club was proud to present the Battle of the Bathsmasters, a dramatisation of a 1879 media spat and public swimming contest to prove women’s swimming skills!

Featuring the Arlington Baths’ first bathsmaster Mr William Wilson, his swimming teacher wife Ruth, and the Arlington’s second bathsmaster Mr Robertson, the dispute was sparked by a tragic double drowning in a Scottish loch. In the end it was decided to hold a public swimming contest to settle the row… But who would be victorious? 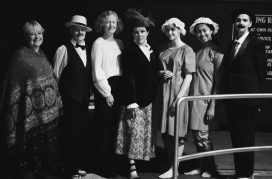 The Battle of the Bathsmasters cast

This film was made by a small group of enthusiastic volunteers at the Baths who came together to create the costumes, play the parts, and film and edit the movie.

We wanted to not only illustrate this episode from the history of swimming in Glasgow but also draw attention to women’s sporting experiences in the 19th century and to Ruth Wilson, who, on her death, was described as the first female swimming teacher in Scotland.