You are here: HomenextNewsnextFeaturesnextWarwick Racecourse 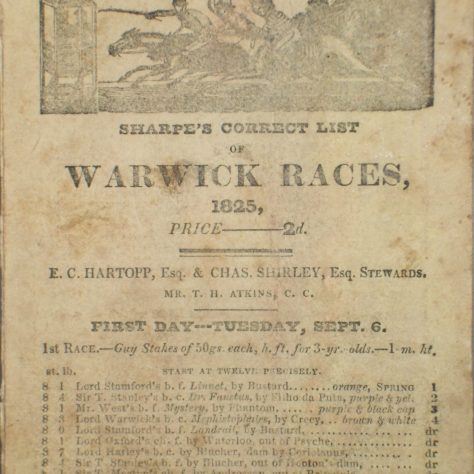 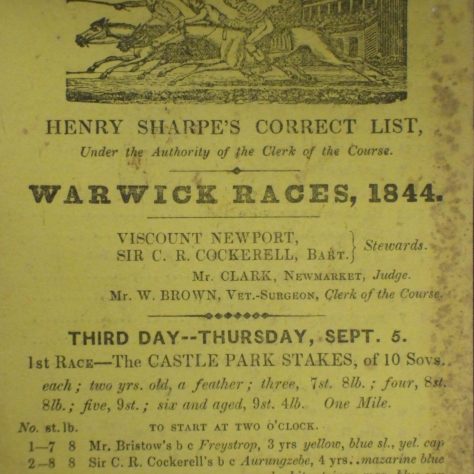 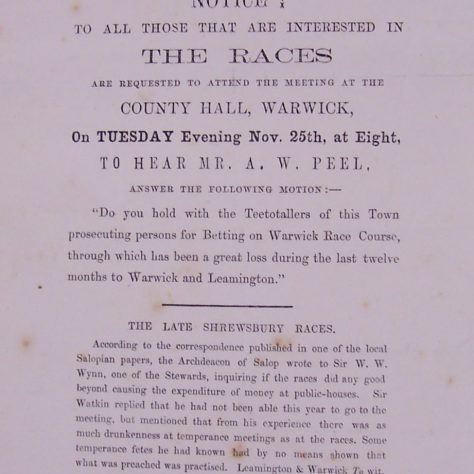 Notice of meeting at the County Hall, where Arthur Peel MP would speak on the betting storm surrounding the races.
Warwickshire County Record Office reference CR 1227

The first racing in Warwick was held in 1694, hoping to raise money for the town after the great fire of that year. The first race at what is now Warwick race course was held in 1707, with the first stand opened in 1808. Warwick, with Coventry, opened the flat racing season for a number of years in the 19th century. Many notable jockeys have raced at Warwick, including Lester Piggott and John Francombe.

The income received from renting out the common lands for racing contributed to the demise of ‘drives’ in the 19th century (where cattle were rounded up, and commoners paid for their release). After the Second World War, it was uneconomic to continue the racing unless the course could be legally closed on race days. An Act of 1948 allowed for the sale of the land and thus, the Commonable Lands became municipal property.

In the 1870s Warwick Races was rocked by a betting storm, where threats of prosecution abounded. In a letter to The Sportsman of April 3rd 1879, it was remarked how attendance of the country gentry at Warwick Races had fallen, “and no doubt this has been caused by the sharpers and roughs swarming the course” (see Warwickshire County Record Office collection CR 1227). Such was the consternation this caused, the local MP (and later Speaker of the House) Arthur Peel spoke on the issue at the County Hall.

See the Victoria History of the Counties of England: A History of Warwickshire Volume Eight, page 236, and page 437 for further information.

This article was originally published on the Our Warwickshire website.