You are here: HomenextNewsnextFeaturesnextPalace House, King of the Downs: Part Two 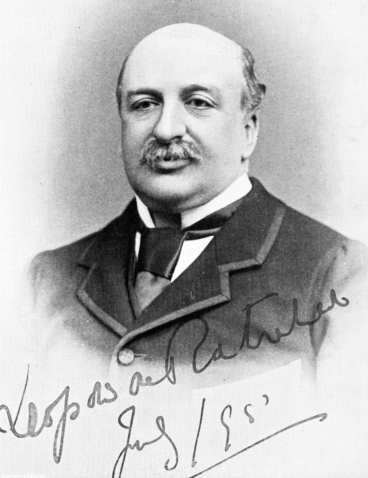 Two years later the mighty French horse Gladiateur (Triple Crown winner) was trained in Newmarket followed by Hermit in 1867, Kingcraft 1870, Favonius 1871, Cremorne 1872 and Galopin 1875. The run continued the following year when Kisber became the second colt to win the race to have been trained at Palace House Stables. The site was now owned by Baron Meyer de Rothschild who installed his private trainer, Joseph Hayhoe, following Godding’s death in 1873.

Kisber was bred in Hungary but had an English pedigree. His sire Buccaneer had won the 1861 Royal Hunt Cup. Buccaneer also sired the filly Formosa who won four British Classics in 1868 (one a dead heat). His dam Mineral was a daughter of a 1,000 Guineas winner. He was purchased as a yearling by the Baltazzi’s brothers but ran in the name and colours of Mr Alexander Baltazzi. The two brothers born in Turkey were sons of an oriental merchant and were educated at Rugby School where their love of the turf evolved. They also had commercial connections with the Rothschild’s family. Palace House Stables was now owned by Leopold (nephew of Baron Mayer de Rothschild who died in 1874) who agreed the Baltazzi brothers could send a few horses to Hayhoe.

As a two year old the colt won only one of this four races but impressed in the final race when he won the inaugural Dewhurst Plate at Newmarket over 7 furlongs. By the time of the Derby on 31 May 1876 Kisber was second favourite at 4/1 behind Petrarch (a son of Lord Clifden) at 2/1 who had won the 2,000 Guineas. In a field of fifteen the race proved an easy victory for Hayhoe’s colt who with former champion jockey Charlie Maidment onboard took the lead at the distance from Petrarch to eventually win by an emphatic five lengths.

The centenary Derby in 1879 was the scene of the next Palace House winner when Sir Bevys took the crown. Trained by Joseph Hayhoe the winner was owned by the Baron Lionel Nathan de Rothschild (the brother of Baron Meyer de Rothschild) though his horses raced under the name of Mr Acton (he owned a stud in Acton).

Sir Bevys arrived at Epsom the winner of only one race, a modest race at Newmarket, from four two year old starts. Starting at an unfancied 20/1 Sir Bevys was well behind at the start but in heavy going jockey George Fordham made good use of the better ground on the stand side and the horse’s stamina to catch the 100/1 outsider Palmbearer. The time of 3 minutes 2 seconds was the slowest since 1856 and no Derby victor since has recorded a slower time. It was Joseph Hayhoe’s third Derby success. His first was Favonius (sire of Sir Bevys) during the Baron’s Year of 1871 (See our recent blog dated 26 May 2016). For the fourteen times champion jockey it was Fordham’s only Derby victory.

The last member of the Palace House quartet to win the Derby was St Amant in 1904. A son of Leopold De Rothschild’s best horse St Frusquin (1896 2,000 Guineas and neck 2nd in the Derby) St Amant was an immensely popular winner as he provided Leopold, a staunch supporter of the turf since 1870 and well known for his charitable work with his only Derby success.

St Amant was trained by Alfred Hayhoe, who succeeded his father Joseph at Palace House in 1881. As a two year old he had won the Coventry Stakes on his debut but was twice comfortably beaten by the legendary filly Pretty Polly. With the latter selecting the fillies’ classics in 1904 St Amant won the 2,000 Guineas with John O’Gaunt in second place. At Epsom the Blue Riband was run in a terrific thunderstorm with flashes of lightning prevalent but this did not deter St Amant, the fourth favourite in a field of only eight. With Kempton Cannon in the saddle the colt led from start to finish winning by three lengths ahead of John O’Gaunt. Despite the awful weather Leopold proudly led the winner in, a lifelong ambition achieved.

The famous stables soon to become the home of the National Heritage Centre for Horse Racing and Sporting Art had added its final chapter to the roll of Derby winners. However, few would disagree that by far the most important of the four was Macaroni one of the saviours of Newmarket.

Originally published on the National Heritage Centre for Horseracing & Sporting Art‘s Blog, and reproduced with their permission. Part one can be read here.