You are here: HomenextNewsnextFeaturesnextConfrontation at Crystal Palace: The Adventure of the Bearded Colossus, Part Two

Confrontation at Crystal Palace: The Adventure of the Bearded Colossus, Part Two 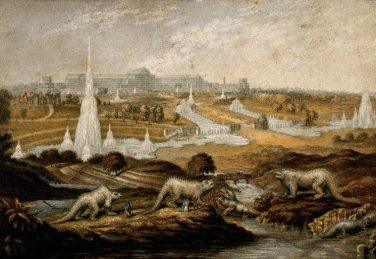 zoom
Crystal Palace Park, shortly after its opening in the mid-19th century. The cricket ground took over the area occupied by the large fountain to the left of the picture, beyond the dinosaurs.
Image courtesy of Wellcome Images 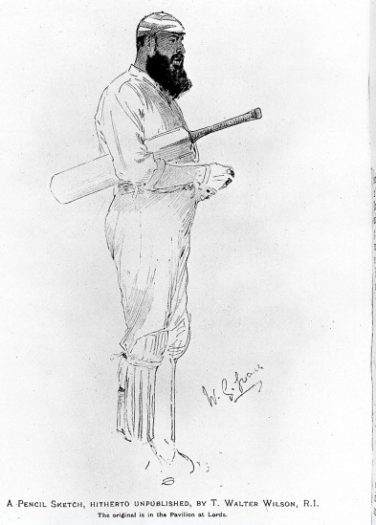 (Continued from part one)

Conan Doyle, a slow-to-medium paced bowler for the MCC, had had a quiet game: taking no wickets in the first innings, and scoring only 4. Now, on the final day, he found himself wheeled in to bowl again. The two main MCC bowlers, Thompson and Cranfield, had taken all the wickets so far. Doyle later recalled the occasion in a long poem, “A Reminiscence of Cricket”:

Before me he stands like a vision,
Bearded and burly and brown,
A smile of good humoured derision
As he waits for the first to come down…

And I – I had tricks for the rabbits,
The feeble of mind or eye,
I could see all the duffer’s bad habits
And where his ruin might lie.

The capture of such might elate one,
But it seemed like one horrible jest
That I should serve tosh to the great one,
Who had broken the hearts of the best.

A lack of threat served him well

And yet: Doyle’s very lack of threat as a bowler, his sheer amateurishness, may have served him well in the end. As he tells it, he sent down two deliveries that Grace treated with perhaps more respect than they deserved, killing them with the bat but not attempting to hit them beyond the crease. Then, on Doyle’s third delivery, when Grace had finally decided that there was no secret weapon and that Doyle was every bit as unpolished as he looked, the great man uncoiled a ferocious shot, and…

Still when my dreams are night-marish,
I picture that terrible smite,
It was meant for a neighboring parish,
Or any place out of sight.

But indeed: Grace’s bat swung a fraction too low and the ball, instead of sailing over the trees and landing in Penge, rocketed up vertically and dropped… safely into the gloves of the wicket-keeper.

The London club promptly declared and sent the MCC in to bat for their second innings. As mentioned above, the day’s play was extended to ensure that a result could be reached and, ten minutes after the game had been scheduled to end, the MCC reached their target and secured the victory. Doyle batted in the second innings but was out for a duck; however, his work was done. It was to be the only first-class wicket he ever took, but after W.G. Grace – even in his twilight years – anyone else would have been an anti-climax.

Not remembered for medicine

We remember neither man for his medical career: although Grace put in many years of general practice and Poor Law work in working-class areas of Bristol, he was no high-flyer, and Sherlock Holmes claimed Doyle before his medical career really gained any momentum. It is clear that if he had stuck to cricket we would not remember Doyle for that either. But the beauty of a sport wedded to statistics is that his feat – which clearly gave him enormous pleasure – is part of the official records to this day.

Cricket fans wanting to see the full scorecard can do so here. And the Wellcome Library recognises both medical high-flyers and those whose main interests lay elsewhere: biographies of both Grace and Doyle can be found in the book collection, whilst Wellcome Images provides several illustrations of both men; there are also small collections of papers relating to both in the Archives and Manuscripts holdings. The main focus of their lives does lie outside medicine, but nonetheless the medical world can claim each as one of ours.