You are here: HomenextNewsnextFeaturesnextStoolball: ‘What Ball?’ History of the traditional, rural women’s sport.

Stoolball: ‘What Ball?’ History of the traditional, rural women’s sport. 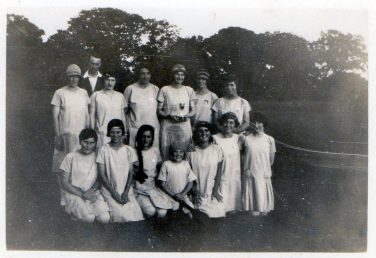 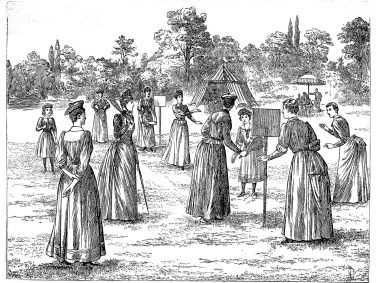 zoom
Drawing of stoolball from Girls Own magazine, 1891
Courtesy of Stoolball England

One of the sports participating in our Sport England funded collections project is Stoolball. Anita Broad from Stoolball England gives us a whistle stop history and highlights some of the collections of this fascinating, largely female, sport.

“Stoolball is a traditional striking and fielding sport very similar in principle to cricket and played mostly by women in the South-East of England. In its original form, it was played by defending a simple milking style stool by rural villagers and farm labourers in fields and local churchyards and was first documented in 1450.

We no longer play with milking stools of course but intriguingly, we don’t know how the game developed into the modern-day sport using shoulder-height wickets. We can make an informed guess; folklore has it that milk maids, tired of bending over to defend a small stool, pushed the legs of the stool into a tree or hedge to create a target at a more convenient height. If you think about it, they could have put the stool atop the church ‘wicket gate’, hence the name we use now for our stoolball posts; wickets. And the seat of handled milking stools look just like a modern stoolball bat!

We know stoolball went to America with the Pilgrim Fathers in 1621 because it’s documented in the Governor’s diary. Baseball historians recognise stoolball as one of its ancestors. Who knows, place stools in a circle and you have base running. Cricket probably evolved from the original form of stoolball too but shush, don’t tell anyone!

Moving swiftly on to Victorian times. Stoolball in Sussex villages is well documented and being Victorian times, of course this is when the first rules of stoolball are recorded. The excellently researched book by Glynde village historian Andrew Lusted ‘The Glynde Butterflies Stoolball Team: 1866 – 1887 England’s First Female Sports Stars’ details social history and matches that took place between local village teams such as the Firle Blues and Chailey Grasshoppers amongst many others. The Glynde Butterflies stoolball team re-formed after the publication of Andrew’s book in 2011.

Read more about the women and girls who played in Victorian times here: https://www.thekeep.info/international-womens-day-gertrude-brand-1844-1927-maud-brand-1856-1944/

WW1 brought the next popularity explosion. Major W W Grantham, local Sussex landowner, London KC and general power-house ambassador for the sport realised the potential of stoolball as a game that could be easily played by rehabilitating injured soldiers billeted in military hospitals such as the Princess Louise Hospital at the Chailey Heritage School for disabled children and the Brighton Pavilion Hospital. There’s so much I could detail around this time but suffice to say stoolball became hugely popular and a fundraiser for the ‘Not Forgotten Association’. A match was played at Buckingham Palace and annual matches were played at Lord’s with the first National Stoolball Association being formed there in 1923. Between the wars there were over 1000 teams playing stoolball around the country. Maj Grantham’s fascinating legacy and book ‘Stoolball Illustrated and How to Play it’ was published in 1919 and can be viewed here on the Stoolball England website https://www.stoolball.org.uk/history/story/major-w-w-grantham/

You can also read a detailed article about Grantham and stoolball published in the 1928 edition of the Sussex County Magazine here https://www.stoolball.org.uk/history/story/stoolball-in-sussex-by-russell-goggs/

East Sussex Record Office holds the Chailey Heritage and Brighton Museums archive at The Keep in Brighton and has some excellent photographs of the soldiers and children playing stoolball.

WW2 made it difficult for stoolball to continue and it contracted back into its heartland of Sussex where it continued to be played by women in rural villages across the county. County matches were also played between Kent and Sussex. After the war stoolball became an important social network for rural village women. In the days when cars were rare for village women Stoolball teams would organise a coach to take them to play other village teams around the county. Women and girls of all ages would meet and socialise through their sport with women from other villages in a way that would have been unlikely otherwise. This was a women’s sport, organised and run by women. They would fundraise by selling ‘teas’, raffles and jumble sales.

Mostly the matches were umpired by husbands, dads or grandads and the scorers were usually other women relatives of the players. Stoolball is still a family orientated sport and it’s not unusual for mothers, daughters and granddaughters to play in the same team. This is where I come in, sadly I never got to play with my grandmother or mother, but they played together, and I now play with my daughter in that same team.

Stoolball is played in East and West Sussex, Kent, Surrey and Hampshire and is gaining recognition again across the country. Stoolball is played extensively in schools in Sussex and there are mixed gender and ladies’ leagues playing throughout the Summer. Indoor leagues are played during the Winter months.

Stoolball has moved into the 21stC and we even have an England team. We are by default World Champs, but we aspire to one day play a true international!

Stoolball is an officially recognised sport by Sport England. www.stoolball.org.uk