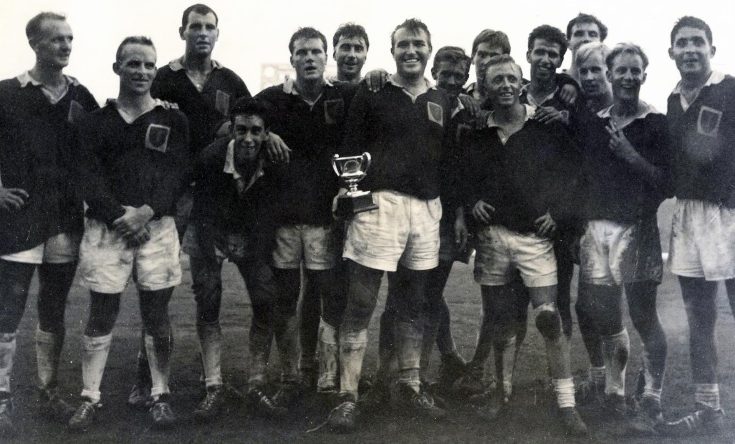 September 2015 saw the start of the 8th Rugby World Cup Tournament. The sport of Rugby Union, as quoted in the Encyclopaedia of Wales is “a symbol of Welsh Identity and an expression of national consciousness”; simply put – rugby is the National Game of Wales.

Although initially, the game was popular in South Wales, Anglesey has long been one of the strongholds of rugby in North Wales, and this photograph takes us back to 1966. Long before George North’s worldwide rugby adventures, another Anglesey man ventured far from home to play rugby.

The big, strong looking fellow in the centre holding the cup is Herbert Evans from Bodorgan. During his time in Africa working as a school teacher, he also played rugby there, and judging by the beaming smile and the fact he holds the silverware – quite successfully.

This image not only captures the joy of victory, but equally captures the fact that they have earned that victory, the men are sweaty, muddy, bandaged and tired, an image that will be echoed during the 2015 world cup no doubt.

This article was originally published on the Anglesey Archives website, and is reproduced with their permission.