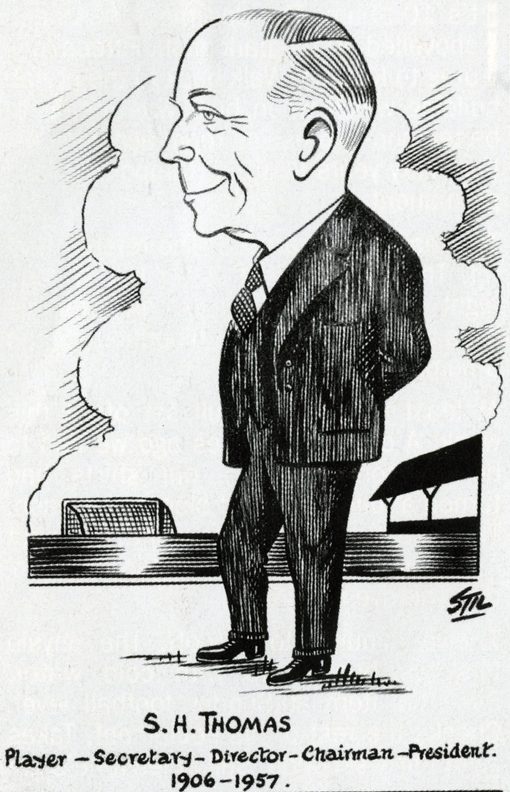 zoom
A caricature of Sid Thomas.
Image courtesy of the Grecian Archive

This caricature features a man who is perhaps less known than he should be at Exeter City. Described as the pioneer of the football club, Sidney H. Thomas was involved in almost every role you could imagine in over half a century at the club.

A key role in the formation of Exeter City

Aged only 15 when he began playing for St Sidwell’s Utd, he was a leading goal-scorer for the side who won the Exeter and District League Championship two years running. Mr Thomas was appointed player secretary of the amateur side, and played a key role in the formation of Exeter City Football Club despite still being a teenager. As a founding member of the club, he was one of the players who took to the field to play Exeter City FC’s very first match here at St James Park on 10th September 1904. The team won 2-1 against the 110th First Royal Artillery, and the winning goal was scored by none other than Sid himself.

From 1908 Sid held the role of secretary at the club, overseeing their rise through the district leagues and the Grecians entry into the football league in 1920. Stepping down as secretary after a club record of 31 years, Mr Thomas became a director of the club before eventually moving into the role of chairman. In 1957 he stood down as chairman, and was appointed lifelong president of the club. Despite no longer having a direct role, Sid always did all he could to support the side, including in later years when a financial crisis saw him donate money to help the club out of a crisis…a true club legend!