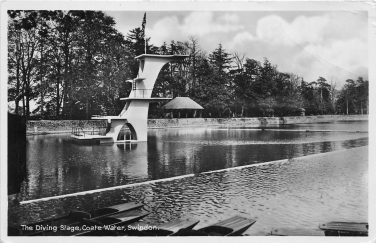 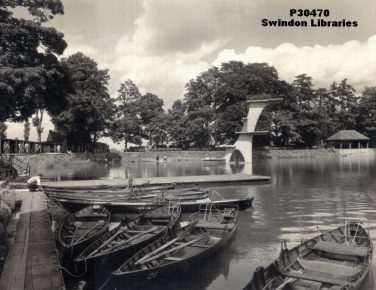 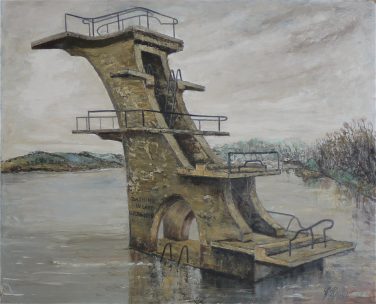 History of the Park

Coate Water County Park is the main green space in Swindon.  It started life in the 1820s as a feeder reservoir for the Wilts and Berks canal but the lakes leisure potential was quickly realised by the Swindonians. It was used for fishing, boating and when it froze over in the winter, was teeming with skaters.

It was also the `New Sea` of the local author Richard Jefferies often reprinted children’s book, Bevis; the Story of a Boy (See below).

The lake was re-imagined as a leisure destination in the 1930s when it was purchased by the Borough Council.  It was landscaped and a new Art Deco pool built, (since demolished).

The diving platform was designed by J.B.L. Thompson, the Borough surveyor in 1935. He was also responsible for the Art Deco concert bowl in the Town Gardens.

This platform was built of re-enforced concrete to the most modern and safe design of the Federation Internationale de Natation Amateur (FINA).

It was opened officially on the 22 June 1935, and Miss Cicely Cousins later the National Diving champion, performed the first dive from it.

Closure of the Platform

After pollution concerns, the lake was closed for swimming in 1958 leaving the diving board to the waterfowl.  To stop errant members of the public using it illicitly the steps were blocked up.  Though it has also lost its railings, the platform is intact.

It was listed (Grade II) in 2013, being one of only four interwar concrete diving platforms to survive to this day, and the sole example located in a lake.  Given that much Art Deco architecture has not survived the passing fashions, we must be thankful for this recognition.