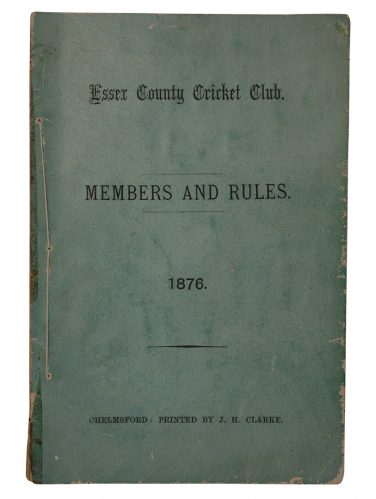 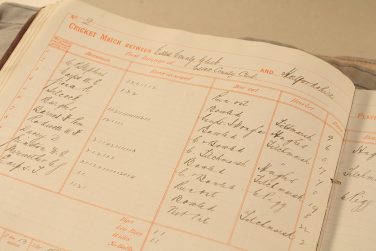 zoom
One of the games from the earliest surviving scorebook, beginning in 1879. One of the Silcock brothers played in this game against Hertfordshire – he was bowled out for 17.
Originally published on the Essex Record Office blog (D/Z 82/2/1)

14 January 2016, marked 140 years since Essex County Cricket Club was established at a public meeting at the Shire Hall in Chelmsford. There had been earlier county sides, but none had lasted very long, and the appetite was there to establish a county club on a proper footing. Adverts for the meeting such as this one appeared in the Chelmsford Chronicle inviting people to attend:

It was agreed at this meeting to establish a county cricket club with its home ground at Brentwood. One Chronicle report following the meeting looked forward to hopefully beating neighbouring counties who had so far overtaken Essex in matters of cricket. Brentwood was originally selected, and the first game took place on 5th and 6th May 1876 at Brentwood, announced in the Chronicle with promises of the building of a grand pavilion, and a part of the ground devoted to lawn tennis and croquet (for the ladies). Brentwood was not to prove as convenient a location as had been hoped, and in 1885 the Club’s home ground was moved to Leyton. It moved again later to Chelmsford, where it remains today.

Early Essex sides were mostly composed of amateur players, with one or two professionals, such as cousins Frank and Joseph Silcock. Despite their professional status, Frank and Joseph both still had other occupations. Frank, born in 1838 in Sawbridgeworth, appears in most census returns as a sadler, with the exception of 1881 when he was described as a ‘Cricket Outfitter’. Joseph was a harness maker, and in 1871 he was also running a beer house. The name of his pub? The Cricketers.

Essex has had its fair share of eccentric results over the years. On more than one occasion they have snatched defeat from the jaws of victory; perhaps the best example was their game against Derbyshire on 19-20 June 1904. Essex scored 597 in their first innings, but went on to lose by 9 wickets. 343 of those runs belonged to Percy Perrin. His innings included 68 fours, and remains the highest score by an Essex player.

Another Essex record was scored by John “Johnny” William Henry Tyler Douglas in another game against Derbyshire, this time in 1921. In this extraordinary game, Douglas saved the Essex innings with S.N. Hare, who together put on a 9th wicket partnership of 251. Douglas himself scored 210 – his highest batting score – and also got his best bowling figures – 9-47 and 2-0. Essex won the game by an innings and 74 runs.

Douglas was a significant figure in the development of Essex cricket. He first played for the county in 1902, then remained there from 1904. He was captain from 1911-1928. Seven times he took over 100 wickets in a season, with a best of 147 in 1920. He also played for England (and captained them), and an Olympic boxer. He was killed in a shipwreck off the coast of Denmark in 1930.

In the 1930s, Yorkshire were the team to beat. In 1935 they lost just one game in the County Championship, and that was to Essex. The two teams played at Huddersfield on 31 July-1 August. Essex bowled out Yorkshire for 31, and went on to win by an innings and 204 runs. Let’s not mention the game in 1932 when Yorkshire scored 555, then dismissed Essex for 78 and 164, winning by an innings and 313 runs…

This is an abridged version of an article originally published on the Essex Record Office blog.