You are here: HomenextNewsnextFeaturesnextNijinsky's Sad Champion Farewell: Part One 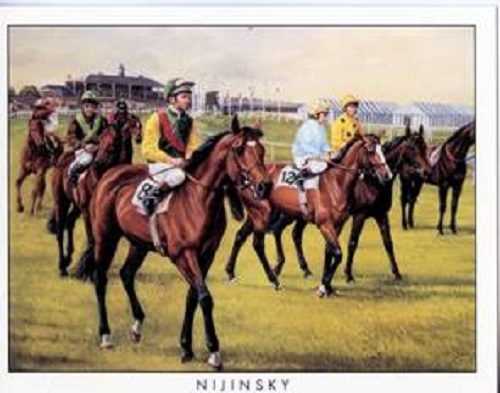 The 1970 Flat racing season was all about one horse, Nijinsky.  The incomparable Irish superstar, who had become the first horse since Bahram in 1935 to win the Triple Crown.  The fact that no horse since has accomplished the feat emphasises the colt’s achievement.

In May, Nijinsky had sprinted clear of a 13 runner field to win the 2,000 Guineas by two lengths; June saw him ease to success over 2 and half lengths in the fastest Derby time since 1936; while in September he clinched the treble by a length in the St Leger.

Three very different challenges for the brilliant son of Northern Dancer (winner of the 1964 Preakness Stakes and Kentucky Derby) under the tutelage of the legendary trainer and jockey combination of Vincent O’Brien and Lester Piggott.  The straight mile challenge at Newmarket, the undulations of Epsom and the stamina test of Town Moor. Nijinsky had also enhanced his stature as a racing great in mid-summer when he cantered to success against older horses, including the 1969 Derby winner Blakeney, in the King George VI & Queen Elizabeth Stakes at Ascot.

Struck down by ringworm

However, after the Ascot success Nijinsky had been struck down by ringworm which seriously interrupted his training regime. He lost all his hair on one flank and he had raw patches on his skin.  Despite recovering sufficiently to win the third leg of the Triple Crown, the team planned to end his career with victory in the Longchamp showpiece, the Prix de L’Arc de Triomphe.

A quality field of 15 runners including including Prix du Jockey Club winner Sassafras; the second and third in the Derby, Gyr and Stintino; and Blakeney lined up for the prestigious autumn prize.

Drawn high in stall 15 Lester played a waiting game on the colt with only four behind him as they turned into the short straight.  He was therefore forced to take a wider route to get a decent run in pursuit of the leaders, Blakeney and Sassafras.   Despite this as the Geoff Lewis ridden Blakeney weakened, Nijinsky drew up alongside Yves St Martin on the French Derby winner with 150 yards to go.

The large British contingent within the crowd now expected the usual winning surge to the line but although he managed to snatch the lead with 100 yards to go, they were to be sadly disappointed.

Even the introduction of the whip by Lester failed to transform the Irish wonder horse, who dived to the left leaving the battling Sassafras clear by a head as they crossed the line.

Nijinsky’s unbeaten record had gone and the recriminations began.  On reflection the exertions of the St Leger, hardly the best trial for the Arc, in addition to the ringworm had taken affect.  On the go since winning the Gladness Stakes in early April at the Curragh, the horse should have been retired.  His owner, Charles Engelhard had syndicated the horse to stand at stud in Kentucky for $5.44 million which made him the most valuable stallion in the world.  There was nothing left to prove, but within 13 days Nijinsky was back on the Rowley Mile where his owner hoped he would end his racing career in a blaze of glory.

Nijinsky was attempting to repeat the success of O’Brien’s 1968 Derby winner Sir Ivor who had won the Champion Stakes after defeat at Longchamp.  What was remarkable about Saturday 17th October 1970 was the massive crowd of 20,000 which descended upon Newmarket.

Originally published on the National Heritage Centre for Horseracing & Sporting Art‘s Blog, and reproduced with their permission.