You are here: HomenextNewsnextFeaturesnextThe Rules and Regulations of a Cycling Club

The Rules and Regulations of a Cycling Club 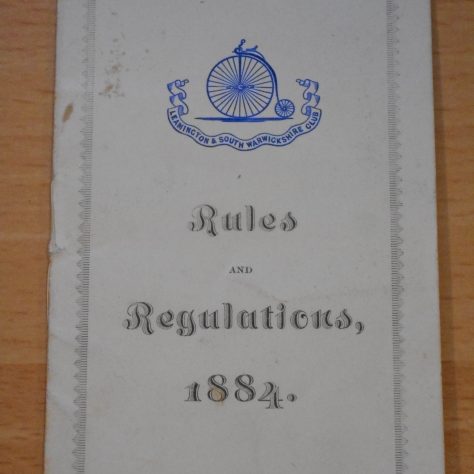 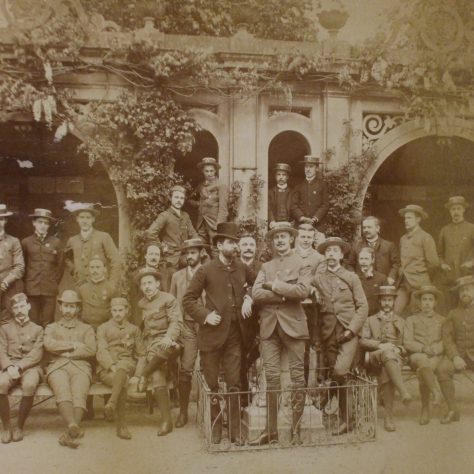 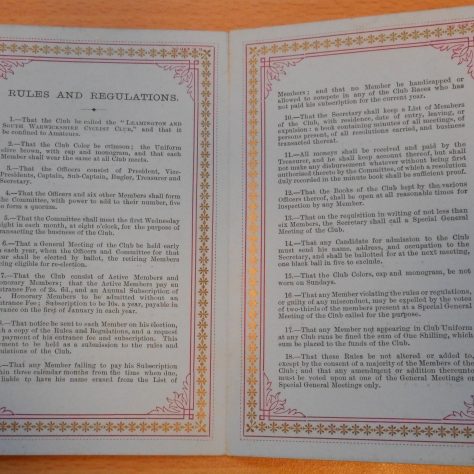 The Aviva Women’s Cycling Tour visited Warwickshire for the first time recently, so we thought we’d have a dig around for some Warwickshire cycling history.

This pocket-size copy of the Rules and Regulations of the Leamington and South Warwickshire Club dates from 1884.1

There are certain elements we would recognise today, including of course the safety implications of riding bicycles – that members ‘should never ride without a bell, and a lamp after dark’ and, perhaps tellingly, should ‘use great care when descending hills not familiar to them’. Protective clothing is not mentioned at all, and indeed, the first bicycle helmets were not commercially produced until the 1970s. The club do seem to be very precise about their clothing, but not in terms of safety. Instead they were expected to buy and don an ‘olive brown [uniform]… with cap and monogram’ at every club meeting and excursion, and were even fined a shilling if they failed to arrive without the correct accoutrements.

The club also suggests an exclusivity which now sounds strange; for to join, an applicant had to send his name, address and occupation to the club secretary for consideration before being accepted for membership by ballot.

The late 19th century has been described as the golden age of cycling, and at this time cycling clubs were very popular all over the country. The first bicycle factory opened in Coventry in the 1870s, and the famous Raleigh factory was opened in Nottingham in the 1880s.  At its peak, there were 250 cycle manufacturers based in Coventry, employing nearly 40,000 workers.

It is reasonably clear that bicycle clubs such as this one were, at least to start with, a middle class pursuit. The fact that you were expected not only to have a bicycle but also purchase the club uniform suggests a certain assumed income. Bicycles in the mid-1880s could cost between £10-£20, and considering the average working class man took home around £42 a year, this confirms that cycling clubs were the pursuit of the wealthy.

Not a feminine pursuit

The clubs were also completely male affairs. At this time, women were rarely allowed much independence and the idea of a woman riding a bicycle, therefore allowing them personal freedom, was thought to be dangerous, not to mention improper, as it encouraged less feminine attire. This uneasiness is highlighted by a protest carried out by male students at Cambridge University in the 1890s. They were angry about a proposal put forward that, if carried, would allow female undergraduates to gain full degrees. To emphasise their opinion, they hung an effigy of a woman on a bicycle from a window, later decapitating it.2 A woman on a bicycle had become a symbol of the movement for female equality.

Times have changed. No longer do cycling clubs demand such dapper uniforms. Nor are they the privilege of middle class men, as the Aviva Women’s Cycling Tour reinforced when it all kicked off on the 15th June.