You are here: HomenextNewsnextFeaturesnextShrove Tuesday Football in Dorking 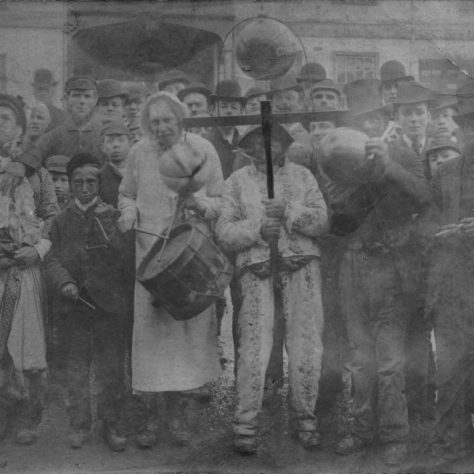 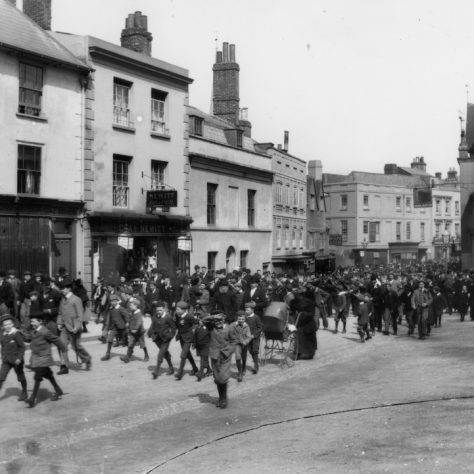 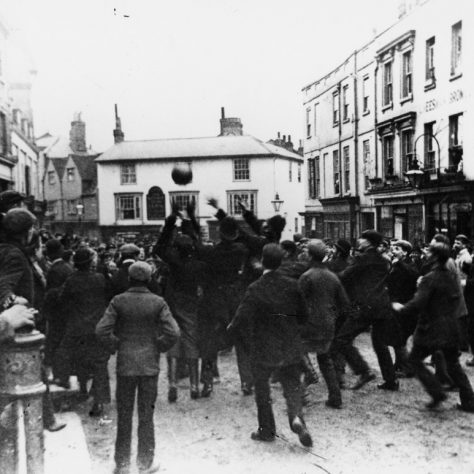 Dorking’s street football probably had its origins in the Catholic Lenten festivals that took place all over England before the Reformation. On the morning of Shrove Tuesday shopkeepers barricaded their premises and children were given the day off school. The pre-match procession consisted of Taffer Bolt’s Band – with drums, pipes and a triangle – in grotesque dress and with blackened faces in 1885. They were lead by a man carrying the frame to which three footballs were attached. One ball was painted red and green, one red, white and blue, and the third in gold leaf. On the bar read the inscription: ‘Kick away both Whig and Tory/Wind and Water Dorking’s glory’.

Before the game a collection was made to pay for the ensuing damage. Then those who lived to the east of town took on their ‘West-ender’ rivals. At 2pm the game kicked off at the gates to St Martin’s. Large numbers participated in play along the streets and over the Pippbrook until 6pm. Drinking and dinner at the Sun followed.

The end came in 1897. Traders complained of lost trade, riotous behaviour and damage, and petitioned for its abolition. Though the local council was in favour of the game, Surrey County Council banned it. Extra police were drafted in as local people gathered to defy the authorities and a crowd of 2,000 watched as a Dorking councillor kicked off. Several balls were put into play to confuse the police, who managed to carry off 8 balls in attempts to stop the game. 52 people were fined for participating; in 1898 60 people – including the councillor who had kicked the game off – received fines.

But the authorities grew more effective in preventing any meaningful play and in 1907 the local paper declared the game extinct.

This post was originally published on the Dorking Museum blog, and is reproduced with their permission.