You are here: HomenextNewsnextFeaturesnextManchester United Says No! 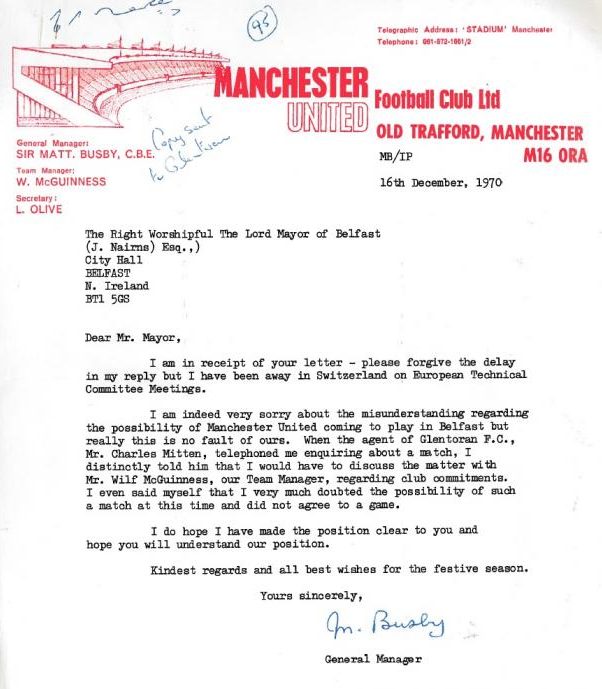 zoom
Letter to the Lord Mayor of Belfast, signed by former Manchester United manager, Sir Matt Busby, 1970. I
Image originally published on the Public Record Office of Northern ireland website, and reproduced under the terms of the Open Government License.

PRONI’s (the Public Record Office of Northern Ireland) document of the month for April 2015 was a letter to the Lord Mayor of Belfast in 1970 signed by former Manchester United manager, Sir Matt Busby.

Manchester United had been invited by Glentoran FC to play a match at the Oval to promote the Ulster ’71 Festival. However, the result proved to be an own goal for Manchester United, as Busby was unable to confirm Manchester United’s participation. This led to Division One rivals, Leeds United, playing instead in a match which resulted in a famous 3-1 victory to Glentoran.

In Sir Matt’s letter, he advises that no commitment was agreed to playing the match and that it would be subject to club commitments and agreement with manager, Wilf McGuiness.

Little did Wilf McGuiness know that he would be sacked 10 days later on Boxing Day.  It is all very reminiscent of the manner in which David Moyes was dismissed only a few months after succeeding Sir Alex Ferguson.

Manchester United was to have been offered £3,500 to field a full team including George Best ‘the idol of Belfast’.  Leeds United would eventually be paid £4,000 for the match that took place on 5th May 1971.

This article was originally published on the Public Record Office of Northern Ireland website, and is reproduced under the Open Government License.