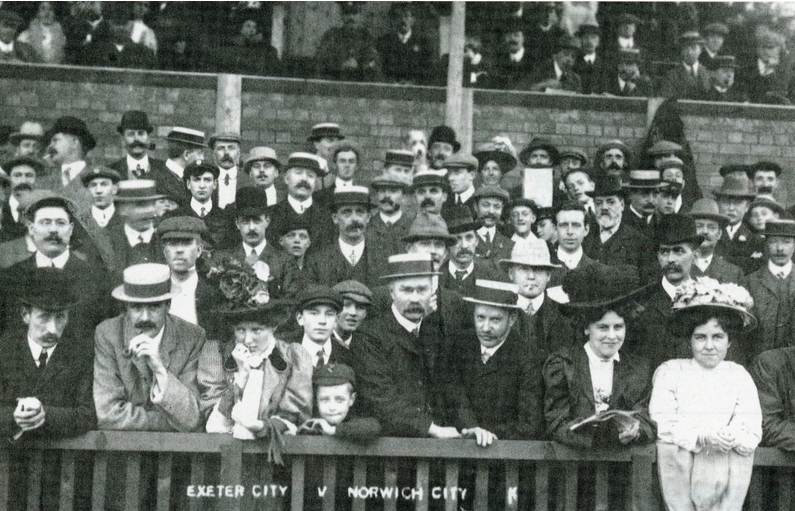 This photograph, taken in the early part of the 20th Century, shows fans gathering for a match against Norwich in the original, ‘Old Grandstand’. As one of the very few images at the club from the period, it offers us a rare glimpse at what crowds were like in the early years at St James. At least for this section of the crowd that is, as this stand was the only part of the ground to have a roof, while the Daisy Bank opposite, and the Duke Bank (Big Bank), were as exposed to the elements as the St James end of the ground.

This all changed in 1926 when a fire, which could be seen and felt as far away as the High Street, completely destroyed the stand and everything inside, including the players kits! Thankfully no one was seriously injured, but for a time the players had to change before matches in a Sidwell Street pub, and walk to the ground in their (replacement) strips. As a result of the disaster, the club and its fans raised funds in order to redevelop this section of the ground, as well as to build the covered Cowshed Terrace on the other side of the pitch. With the Cowshed being redeveloped into the Flybe Stand in 2001, the Old Grandstand as we see it today is the oldest structure in the ground, but despite its near 90 years of age, it is not the original.

In 2017 plans were put in place to replace this structure with a new modern build, with work to begin in the summer of that year.