You are here: HomenextNewsnextFeaturesnextThe Sound of Leather on Willow: Part One

The Sound of Leather on Willow: Part One 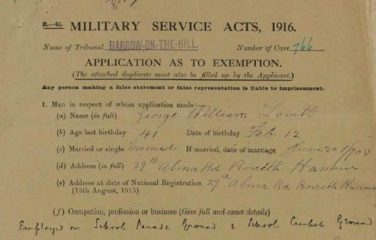 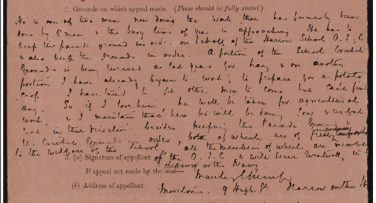 It is that time of year again when the football posts come down and cricket squares are cut across parks and village greens. From a personal perspective, British summer is built around the sound of leather cricket ball whacking against willow bat (or clattering into one’s stumps!), usually via the relaxing ambience of BBC’s Test Match Special.

The National Archives published this piece as part of their series of First World War Military Service Tribunal posts, and it looks at a cricketing-themed case. The immediate view of this case would be to see it as a weak claim for exemption from military service; on further reflection, it reveals the growing demand for men to serve in the British Army as the war progressed.

George William Lovett, aged 41, of Alma Road, Roxeth was employed by the Harrow School from around December 1914 to maintain the school’s cricket and parade grounds. In February 1917, the Assistant Master of the school applied to the Harrow on the Hill local Military Service Tribunal for George to be exempt from compulsory military service on that grounds that his work was of national importance.

The application form records the decision of the local tribunal at Harrow, stating that ‘the application be not accepted on the grounds of insufficient reasons for so doing’ (MH 47/94/23). On the face of it, being employed to maintain the parade ground and cricket pitch does not fit suitably with the term of work of ‘national importance’.

Harrow School subsequently appealed against this decision and took their case to the Middlesex County Appeal Tribunal, which was heard on the 11 April 1917. The appeal form that the Assistant Master completed provides us with a more detailed summary of the situation at Harrow. In the personal statement to outline the grounds of appeal, it is stated that George is one of two men now doing the work that had been undertaken by eight previously. Likewise, George’s call up to service is also right upon ‘the busy time of year’.

Crucially, the appeal statement details the work George is employed to do. Far from cutting the cricket square as spring turns to summer, George was tasked with maintaining the parade ground for the Harrow School Officer Training Corps, designed to help develop future officers for the British army. Likewise, parts of the school’s cricket grounds were being put to use for agricultural purposes, including a potato crop in April 1917.

The statement continues by revealing that the school had made efforts to recruit alternative men to carry out this work to free George for service, but had failed to find any. This was not the end of the matter however, as part two of this article will show.

This article, by David Langrish, has been adapted from the National Archives blog, and is reproduced under the terms of the Open Government License.