You are here: HomenextNewsnextFeaturesnextGeorge Earl: Portraits of a Shooting Season 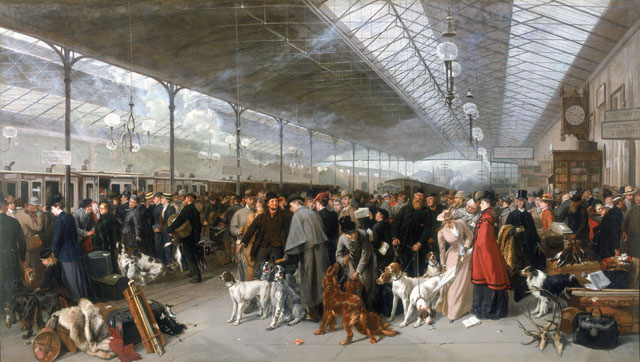 A while back, I was asked to give a group talk about two paintings that are on display in Station Hall; ‘Going North, Kings Cross Station’ and ‘Coming South, Perth Station’ by George Earl. These Victorian realist works are two of the most popular paintings in our art collection.

Earl was famous for his paintings of sporting events and animals, particularly dogs. He exhibited at the Royal Academy from 1857, and one year exhibited a massive 19 works. His most famous works belong to the series ‘Champion Dogs of England’, c.1870, reflecting his membership of the Kennel Club and his interest in the animal.

The paintings in our museum’s collection are copies made by the artist of his now lost originals. The paintings were commissioned by Sir Andrew Barclay Walker of the Walker Brewery, Liverpool – our copies (made c.20 years later) were discovered in The Vines pub, in Lime Street, Liverpool. Since the Museum acquired them in 1990 they have been cleaned and conserved, with the old discoloured varnish removed.

‘Going North, Kings Cross Station’, 1893, shows a party awaiting the 10am train to Scotland. The scene is set in the East Hall of Kings Cross Station (designed by Lewis Cubitt in 1852). The group represented are upper class passengers and their servants, pictured with all of their hunting and sporting equipment. A young girl is depicted with her Indian Ayah, a gamekeeper, grooms and footmen, and the artist himself is in there too.

Typical of Earl is the array of breeds of dog which accompany the party; in these paintings the artist marries his trademark sporting subject with the modern theme of the railway station.

The painting in the image on this page shows the same party on their return journey from Perth with their skins, fish, grouse, blackcock and even antlers. It’s possible to pick out the same characters (and dogs) in both paintings. In the 19th century this journey would have taken Earl’s travellers around 12 hours, leaving Perth at 1550 on the overnight sleeper train and arriving in to Kings Cross at 0350; the current journey is much faster at around 8.5 hours.

This article was originally published on the National Railway Museum website, and is reproduced with their permission.