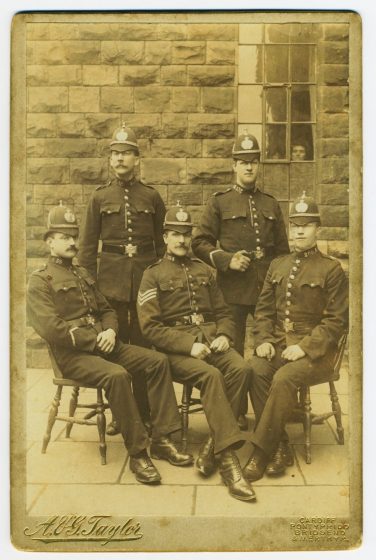 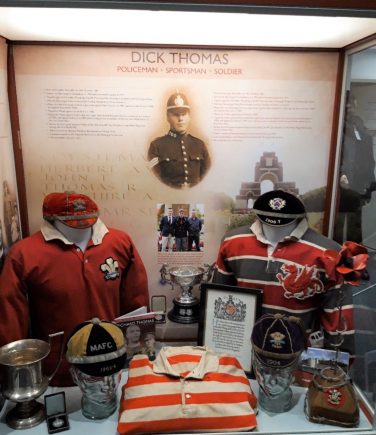 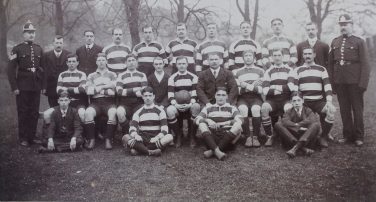 Sport has played a huge part in the history of South Wales Police and its predecessor forces. Across three centuries, many officers and staff from south Wales forces have represented Wales and other nations on the international sporting stage.

Since the nineteenth century one sport in particular has been strongly associated with the police forces of south Wales. That sport, of course, is rugby.

Between 1896 and 1995, 64 officers from south Wales forces received international honours in rugby. One of the 64 was Richard ‘Dick’ Thomas – whose sporting collections are on display in the South Wales Police Heritage Centre. Prior to becoming a rugby international, Dick Thomas joined the Glamorgan Constabulary in 1904 and served as a policeman in the Aberdare, Ystrad Mynach and Bridgend Divisions of the force. His hard work on the beats of Glamorgan paid off in August 1913 when he was promoted to the rank of Sergeant.

While serving as a constable in Glamorgan, Thomas played a role in two Grand Slam winning Welsh rugby sides and became a champion boxer. Along with 9 other police officers of south Wales, Thomas is recognised as a member of Wales’ first golden generation of rugby [1900-1911]. His remarkable sporting achievements are summarised in his display within the South Wales Police Heritage Centre. Exhibits within the Dick Thomas display include:

As well as gaining international honours with Wales, Thomas represented teams such as Bridgend RFC, Mountain Ash and the Glamorgan Police. He was a police team regular in the period before the First World War and played alongside the likes of Billy Spiller – another Welsh international.

Like so many young men of his generation, Dick Thomas made the ultimate sacrifice by enlisting to fight in the First World War. In July 1916, he was killed in action at Mametz wood on the Somme. He has no known grave and is commemorated at the Thiepval Memorial.

During the years of the Great War Centenary, Thomas’ story was told in-detail in this booklet: https://bit.ly/3khJgT7

In adherence to government advice, the South Heritage Police Heritage Centre remains closed to the public due to the Covid-19 pandemic.

More information about the artefacts on display within the Heritage Centre can be found on our page within the People’s Collection Wales website: https://bit.ly/39zuVws

If you wish to contact the Heritage Centre directly, please email us at: PoliceHeritage@south-wales.pnn.police.uk