You are here: HomenextNewsnextFeaturesnextA Summer Excursion with Burroughs and Wellcome

A Summer Excursion with Burroughs and Wellcome 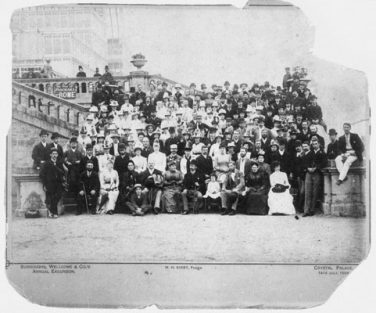 zoom
Standing shoulder to shoulder with their employees, both Wellcome and Burroughs are visible in the centre of the second row: Burroughs in a white cap, Wellcome two places to his left, distinguishable by his flamboyant moustache.
Image courtesy of Wellcome Images 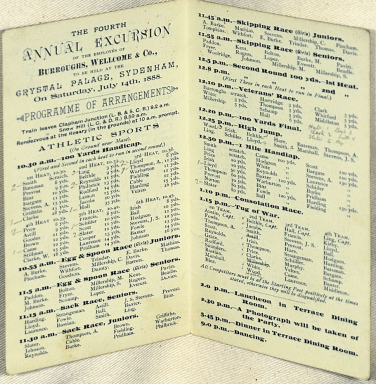 The archives of the Wellcome Foundation are one of the largest series of records held in the Wellcome Library.  Dating from the 1860s to the 1990s, they consists of papers produced by Burroughs Wellcome & Co (BW&Co) – the pharmaceutical business co-founded by Henry Wellcome – through the company’s consolidation into a major international concern, up until its merger with Glaxo (to form GlaxoWellcome) in the 1990s.

As such, the papers are rich in detail on such areas as the marketing of the company’s products and the development of the company’s research laboratories and factories. The archive also sheds light on the working conditions of the employees of the firm, particularly in its early years.

Wellcome and the co-founder of the business, Silas Mainville Burroughs, have been depicted as paternalistic employers: establishing an eight-hour day and a profit-sharing system for their employees and also supplying workers at their Dartford factory with attractive gardens for their recreational use.

One such area in which the Wellcome Foundation Archive illustrates this paternalism, are the papers derived from the business’s annual staff outings, which would take place in the summer months.

On 14th July 1888, the staff of Burroughs Wellcome & Co took a trip to the Crystal Palace at Sydenham, and the day was caught for posterity in the group photograph. Standing shoulder to shoulder with their employees, both Wellcome and Burroughs are visible in the centre of the second row: Burroughs in a white cap, Wellcome two places to his left, distinguishable by his flamboyant moustache. (Indeed, it’s rare to see Messrs. Burroughs and Wellcome together in the one photograph). If events were going according to plan, we know that this photograph was taken on the 14th July 1888 between 2.45pm and 5pm. We can be so specific because a programme of the arrangements of the day has survived, with the photograph scheduled to be taken after a morning and afternoon of light-hearted sporting activities.

Burroughs’ Wellcome & Co employees were competing in a variety of activities: sprints over a 100 yards, distance running over one mile, a high jump competition and the exertions of the tug of war. Female employees, on the other hand, had their own events, competing in egg and spoon races and skipping races…

However, what’s perhaps most notable about this excursion is the first competitor listed in the (male) Veterans’ Race – this being Silas Mainville Burroughs himself. Sportingly, the co-founder of the company gave the other competitors – and members of his workforce – head starts of between three and five yards.  Whilst the photograph and programme of events have survived, the result of the race hasn’t been recorded for posterity.

Commitment to health and exercise

Whilst Burroughs competed against his employees in this event in 1886, there’s no evidence of Henry Wellcome ever joining him on the starting line at this or any other staff excursion. Indeed, Burroughs was known for his commitment to health and exercise and it’s ironic that he died in 1895 whilst on holiday in the south of France, developing pneumonia after a lengthy bicycle ride.

Let’s not leave things on too sombre a note: we’ll leave the employers and employees of Buroughs Wellcome & Co at the time their photograph was taken, on the afternoon of the 14th July 1888 – perhaps tired after their sporting exertions, but no doubt looking forward to the dinner (due to start at 5.45pm, in the Terrace Dining Room) and dancing (9pm).