You are here: HomenextNewsnextFeaturesnextThe Artist, the Spy and the Hennessy Gold Cup: Part One

The Artist, the Spy and the Hennessy Gold Cup: Part One 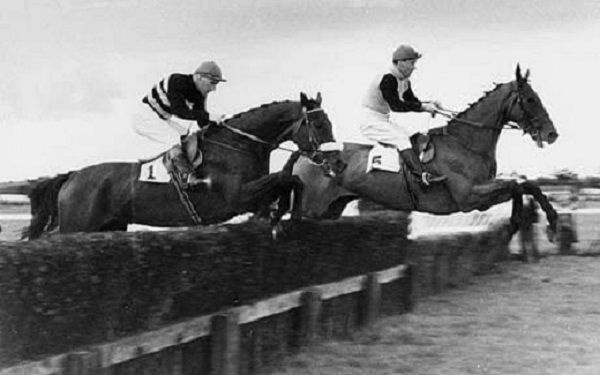 Other than Paul Nicholls, who has trained as well as ridden a winner of the Hennessy Gold Cup? The answer is Derek Ancil, who on 26th November, 1960, trained and rode Knucklecracker to Newbury glory. But what is the link between that success and the worlds of Art and Espionage?

Ancil’s family hunted and farmed not far from Fred Withington’s training base, near Bicester. When young Derek showed an interest in racing, his father bought him a horse called Dusky Chimes to ride competitively. The 60 guineas purchase proved to be a bargain and at Wincanton, on Boxing Day 1946, became Derek’s first winner, and twelve months later the partnership scored at Kempton’s Christmas meeting.

In 1951, Mr D Ancil had one success in 28 rides, and the following season, after 19 winners from 80 rides, turned professional. Steadily making his way as a jockey, Ancil won the 1955 Scottish Grand National, on Bar Point, and the 1958 Grand Sefton Chase on Tiberetta.  It was not until 1959 that he started to combine riding with training.

In his first season as trainer-jockey, Ancil rode 26 winners, and saddled 18 to win nearly £5000, a not inconsiderable sum by National Hunt standards. Among the horses in Ancil‘s yard was Major L S Marler’s Knucklecracker and he was on target for the Hennessy Gold Cup, scheduled to be run at Newbury for the first time after Cheltenham hosted the first three runnings.

Twenty runners went to post for the £5128 prize and on paper it looked a strong race. Irish raider Zonda headed the weights with 12st. He had won the 1959 Irish Grand National, was a creditable third in the Cheltenham Gold Cup, and only a week earlier had easily beaten Roddy Owen, a former Gold Cup winner, at Leopardstown. He looked primed for the race by Matt Geraghty and with Pat Taaffe aboard he was a worthy favourite at 4/1. Next in the handicap came Winning Coin (11st 5lbs) and Oxo (11st 3lbs).  Winning Coin, partnered by Dave Dick, had won his last five races and looked promising. whilst the popular Oxo, the winner of the 1959 Grand National and the mount of Michael Scudamore, was well supported at 5/1.  Plummer’s Plain with Ron Harrison was another thought to be in with a chance having clinched the Whitbread Gold Cup in April.

Knucklecracker also entered the race in good form.  After scoring at Folkestone and Stratford he notched up a hat trick in three mile chases when defeating the highly rated Frenchman’s Cove at Cheltenham last time out.  Some, however, doubted his ability to stay the 3 ¼ miles in a truly run race on heavy going, and consequently he started at 100/7.

At flag fall, those at the foot of the handicap made the running. On the first circuit, Winning Coin was the only faller and the race looked wide open.  However, as the testing conditions started to take their toll the race seemed to be between Plummer’s Plain, who built up a big lead, Ankerdine, his nearest pursuer, Zonda and Knucklecracker. Plummer’s Plain had shot his bolt before four out and Ankerdine weakened soon after. The race was now a match between Zonda and Knuklecracker.

Timing it perfectly, Ancil asked Knucklecracker to out-jump Zonda at the fourth last and made the best of his way home. Conceding 13lb to the seven-year-old, the Irish horse steadily fell behind. Ancil looked over his shoulder twice – he said that he could not believe his good fortune at the first glance — and eased his mount to a 15 length success.  After the race he described Knucklecracker as

a brilliant jumper who stayed forever; we won very easily. The old horse was not a good feeder, but when he was given a bottle of Guinness, he ate up. A lorry would turn up each month and we had a free order. I dare say a fair bit went down the throats of the lads.

Much of Ancil’s success was down to an association with Ronald Horton. On leaving Uppingham School, Ronald perfected a dog training act and toured Europe with the Royal Italian Circus. In the inter war period, this larger than life character worked in the iron, steel and coal industries travelling extensively through eastern Europe. Whilst on legitimate business, he gleaned military intelligence and reported back to the British government.  During the war, as a King’s Messenger, the born gambler undertook several missions into Nazi controlled Europe, using his connections to work with the Resistance in France and the Partisans in Yugoslavia.

Part two can be read here.