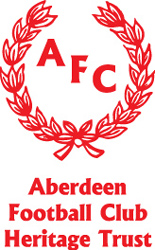 The Aberdeen FC Heritage Trust is an independent charitable organisation working closely with Aberdeen Football Club in order to care for and expand upon the historical record and memorabilia of Aberdeen FC and its supporters and the community it serves.

The idea of setting up a Trust had been in several minds for some time and finally started to come together in the summer of 2008 when the club’s board approved a proposal on the subject. An initial meeting of possible Trustees was held in September 2008 and work began in earnest; the Office of the Scottish Charity Regulator (OSCR) formally approved the Trust as Charity Number SC04596 in June 2009.

The Trust’s aims are fairly simple on paper, as we seek to work on all aspects of the history of Aberdeen FC and its fans. The tough part will come as we work towards setting up a fully fledged museum where the story can be told and the goods and chattels of the Club and supporters can be viewed in the proper surroundings.