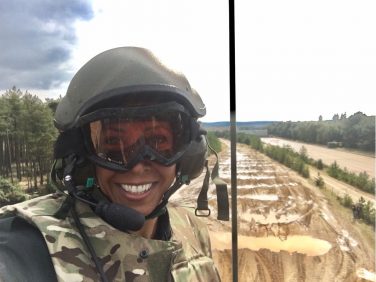 “One of my earliest goals was to join the Army and win an Olympic gold medal; I am really pleased to be a Sporting Heritage and Armed Forces ambassador. The Project celebrates and shares the unique link between the two sectors supporting the collection, preservation, access and research of sporting heritage and the armed forces

Sporting Heritage and the armed forces tells the story of ordinary people who were called upon to do extra ordinary things and how sport helped them get through these traumatic events. We need to preserve the memory of all our heroes in the manner in which they themselves would wished to be remembered; on the “Field of Sport”  Archive material is all our heritage.”

Col Dame Kelly Holmes won two Gold Medals at Athens Olympics in 2004 for the 800m and 1500m cementing her place in history as the first women ever in Great Britain to win two gold medals at the same games.

In 2008 Kelly founded and is now President of The Dame Kelly Holmes Trust, which helps disadvantaged young people in the UK.

Kelly opened her own coffeehouse in her hometown of Hildenborough in December 2014 which is named Café 1809,(pronounced one eight oh nine) after the Olympic race number worn in Athens.

Kelly has won numerous awards for her services to sport and most recently won a Beacon Award for Philanthropy.  Kelly feels very strongly about giving something back and has supported many charities over the years.

Most recently, Kelly was made an Honorary Colonel of the Royal Armoured Corps Training Regiment in September 2018.

Dame Kelly admits to being obsessed and driven by success and is motivated in providing inspiration to others to achieve their own goals in life.