“History is a great thing. It gives us understanding of what has gone on before us and allows us to understand where we are today because of these events. As a youngster I remember watching Sally Gunnell winning the Gold medal in the Barcelona 1992 Games and from then on believing that it was possible for me to achieve great things in sport too. I’m now so privileged to hear similar accounts of how my own sports achievements created this belief for others, or people recall their joy and passion at my success. We can’t let these events and memories fade, instead we need to celebrate and showcase them so that they act as continuous inspiration and pride for others.” 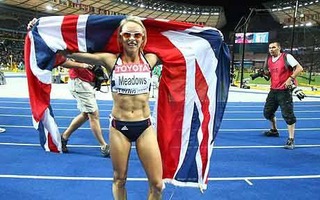 Jenny has represented Great Britain since the year 2000 when she became World Junior Champion with her fellow Great Britain Juniors 4x400m relay team. Her career has gone from strength to strength – today Jenny is the third-fastest British woman over 800m.

A GB Olympic Athlete, Jenny became the British 800m indoor record holder in a winning time of 1:59.11 – 0.1sec faster than Holmes’s record that stood for 7 years. She went on to improve the PB at the World Indoor Championships in Doha where she was awarded the captaincy of the Great Britain team and claimed the World Silver medal in a time of 1:58:43.

Injuries forced Jenny to miss London 2012,  however she made a return to competitive action to become world leader in the Women’s 800m indoors in 2015.

Jenny retired in July 2016  and is currently enjoying coaching masterclasses and skill workshops in schools and athletic clubs/running groups. A key speaker at public events, Jenny has also taken on a number of Directorship and Trustee positions within the sport, leisure and health industry. 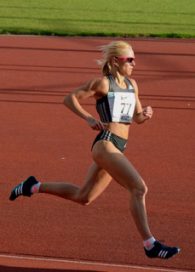 We had the enormous pleasure of catching up with Jenny ahead of the Tokyo 2020 Olympics for a special episode of our In Conversation series.

Jenny discusses the games taking place during the Covid-19 pandemic, how they may present an opportunity to remember the core Olympics values in the most unusual of times, and considers how the athletes might be feeling as they prepare for Tokyo. Jenny considers her own sporting heritage memories, inspirations, and the experiences, which have helped inform her current work assisting the next generation of athletes. We also hear about some exciting research into the heritage numbers of previous GB athletes that the family have been engaged in during lock down, and how this may further help inspire future athletes as they can see their place in the history of their sport.

Listen to Jenny Meadows In conversation