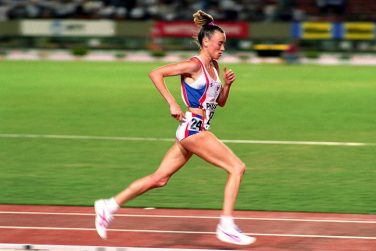 “I am pleased to be a Sporting Heritage Ambassador! History of sport evolves champions of the future, I am looking forward to supporting and nurturing our future sportsmen and women to achieve better performances both mentally and physically and to gain the winning mentality to be the best they can be.”

The brilliant career of Liz McColgan can be broken up into three parts: her glory at the Commonwealth Games in her own country, her superb World Championship triumph in Tokyo and her ability then to adapt that track technique to the roads. All three of them were memorable because of the drama McColgan brought to the event and the meaning they had on the nation.

After retiring Liz became chair of Scottish Athletics from 2003 to 2005. Liz is also leads coach for her daughter, Eilish, and has taken her to a number of World class championships including the Olympic Games in 2012 and the World Championships in 2013.

“ I moved to Doha 2013 , and visited local international schools it came very clear that their was no provision for international kids to participate in athletics . So I set up Doha athletic club with only 4 girls which has grown over the years. We develop athletic skills from the age of 5-18 years , life skills for general fitness and activity. And create opportunities for competition.”