You are here: HomenextNewsnextPodcastsnextGracing the Mat - the influence of traditional Panjabi wrestling in the UK

In this first episode of the Ignored Heritage pilot project Kristopher Mckie introduces filmmaker Sav Kyriacou (twitter.com/digitalw0rks) who, through Ranjit Sandhu from Slough Wrestling Club (twitter.com/SloughWrestling), has been helping older members of the Panjabi community share the traditions of Panjabi wrestling – known as Pehlwani – with younger members of the British Panjabi community. 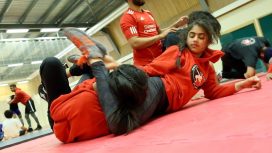 Wrestling remains extremely popular in Panjabi communities. But rather than adopt the traditional Pehlwani form dating back many centuries in the Panjab, into which Ranjit provides a fascinating insight, younger Panjabis tend to participate in the Olympic freestyle form of wrestling.

To watch Sav’s film, which was a Heritage Lottery Funded project, visit www.panjabiwrestling.org.uk. For other films and projects by digital:works visit: www.digital-works.co.uk.

For more information about the Ignored Heritage pilot project email Kris on kristophermckie@gmail.com