You are here: HomenextEventsnextSector events and exhibitionsnext'Offside': Women's Football Across the Centuries

'Offside': Women's Football Across the Centuries 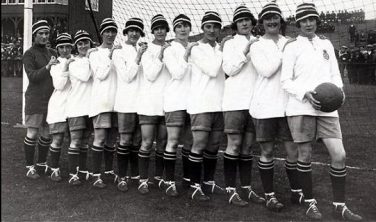 zoom
A line-up of the Dick, Kerr's Ladies, taken in 1921. Lily Parr is on the far right.
Image originally uploaded to Wikipedia

Currently on tour at Edinburgh Festival until August 28th, this play focuses on the prejudice and difficulties that Womens’ Football has faced in achieving recognition. Banned by the Football Association in 1921 (a ban not lifted until 50 years later), the play is based on historical research and combines a fictional story with that of Carrie Boustead, a black female footballer of the 19th century, and Lily Parr of Dick, Kerr Ladies,

As an insight into the historical trajectory of women’s football, this play brings the past starkly into the present.