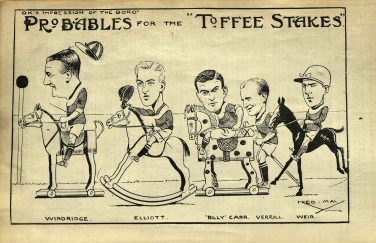 Bringing together work spanning the early 1900s to the modern day from acclaimed architects, cartoonists, illustrators, painters, photographers and sculptors, ‘Art of Ayresome’ celebrates the people, performances and place that defined the club for almost a century.

‘Art of Ayresome’ includes contributions from a number of today’s leading artists alongside historic plans by world-famous stadium designer Archibald Leitch and early twentieth century football cartoons by Fred May, an internationally acclaimed caricaturist whose depictions of leading political and society figures feature in the National Portrait Gallery collections.

Online gallery invites fans to create their own artwork

The online exhibition also features a number of newly digitised publications, interviews with artists and fan videos. Visitors are also invited to submit their own ‘Art of Ayresome’ inspired art as part of the ‘Ayresome Art Club’. The initiative will see a selection of submissions featured in the online exhibition, with a range of Boro prizes up for grabs for the top three artworks as selected by the Art of Ayresome project.