You are here: HomenextEventsnextSector events and exhibitionsnextMan and Mountain: Chris Bonington 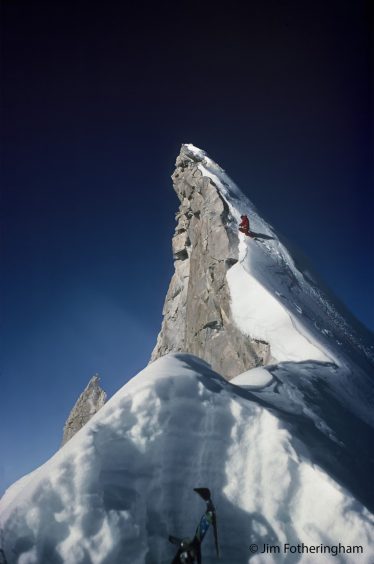 Our exhibition closely follows Chris’ journey that rose from the unassuming beginnings on the sandstone of Harrison’s Rock to the highest summits on earth. Despite primitive equipment and being very much an outsider to the climbing scene in his early years, Chris’ innate passion for the mountains drew him ever higher and further, to the mountains of Snowdonia, the Alpine faces of the Eiger and Dru and ultimately to Annapurna and Everest. It is a journey of mountaineering achievement that is equally matched by the rise of climbing and its growth in to what is now a global sport and community. Chris’ constant drive and determination has seen him remain at the forefront of this development and he has helped shape its growth through his indefatigable writing, speaking and advocacy, a legacy that saw him awarded the prestigious Piolet d’Or lifetime achievement award in 2015.

Yet against such global recognition it is Chris’ passion for and commitment to Cumbria and the Lake District that is perhaps most striking. Throughout a career of triumph and tragedy on the world’s most inhospitable peaks Chris has returned time and again to his home in the Lake District. In doing so his achievements have resonated locally at a level that is not often found in mountaineering. Chris’ natural flair for communication has seen him become a symbol of British mountaineering and patron of notable organisations such as the Campaign for National Parks and the Outward Bound Trust, whilst his honesty and humility has repeatedly drawn the ordinary climbing community towards him.

It is these threads that the exhibition seeks to capture; through oral history recordings of local Cumbrian organisations, people and tourists, and a program of learning resources for local schools, Mountain Heritage Trust is looking to celebrate not just Chris’ life and mountaineering career, but how the landscape and mountaineering community has changed and equally left its mark on him.

This Cumbria wide project supported by the Heritage Lottery Fund will be based from Keswick Museum where members of the public will be able to see previously unseen material from Chris Bonington’s collection, learn about the life of this iconic mountaineer and his inseparable links with the incredible Cumbrian fells. Alongside this will be unique perspectives from the public and organisations on their own experiences of the Lake District.

The exhibition runs until January 6th 2019.