All webinars and hangouts are currently FREE of charge. Please read through the guidelines attached below to ensure you can access and use the Zoom platform during your chosen webinar event. 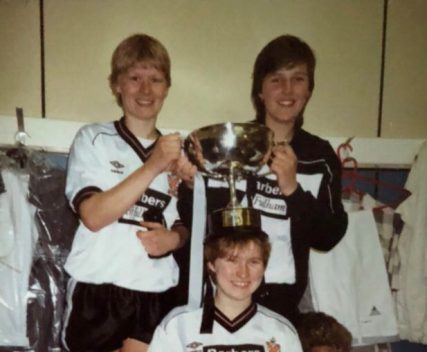 In this webinar, BBC sports journalist Chris Slegg and 1985 Women’s FA Cup winner Lori Hoey explore some of the moments that have shaped the evolution of the competition.

The FA Cup is one of the most famous trophy names in world sport but for decades the women’s competition was largely ignored by the media and general public. That though is beginning to change as the 50th anniversary season of the knockout tournament nears its end culminating in the Covid-delayed 2021 Women’s FA Cup final, which takes place on 5th December, will be a match every bit as worthy of its place in the limelight as its male counterpart. Two fully professional teams – Arsenal and Chelsea – will battle it out in front of tens of thousands of fans on the hallowed turf beneath Wembley’s famous arch. Millions more will be watching live television coverage on the BBC.

Join us as Chris, author of  ‘A History of the Women’s FA Cup Final’ considers where we would be now if the competition had been fully embraced by the authorities half a century ago. While Lori, who won the Cup with Friends of Fulham, relives the triumph – and tribulations – faced by players of her generation.

You can also catch up with our full range of sector support webinars by visiting our YouTube channel.
YouTube Playlist

Find out more about how to join these national and thematic forums which support sporting heritage development, discussion and delivery across the UK.