You are here: Home>Sporting categories>judo>University of Bath Archives and Research Collections

In 1956 Richard (Dickie) Bowen was selected to represent Great Britain at the 1st World Judo Championships in Japan. He subsequently spent three years training at the Kodokan in Tokyo. His life-time association with the Budokwai, the UK’s oldest judo club, first as a judoka and instructor, and then as a committee member and Vice-President, continued when he returned home. He also became actively involved with the British Judo Association. Bowen had always been interested in the early development of judo, and in 1990 he started work on a project to document the people, techniques, ideas and styles connected with ‘the old judo’ that he felt might otherwise be forgotten. Fifteen years later, he had painstakingly assembled a substantial UK judo archive. It is the only judo collection of its type in the country and constitutes a precious resource of unique and original records, photographic material, rare published works and specialist journals offering not only a detailed history of UK judo, but also fascinating insights into broader topics including the growth of organised physical activity, the role of gender in sport, changing approaches to martial arts instruction and management, Anglo-Japanese relations and international politics. 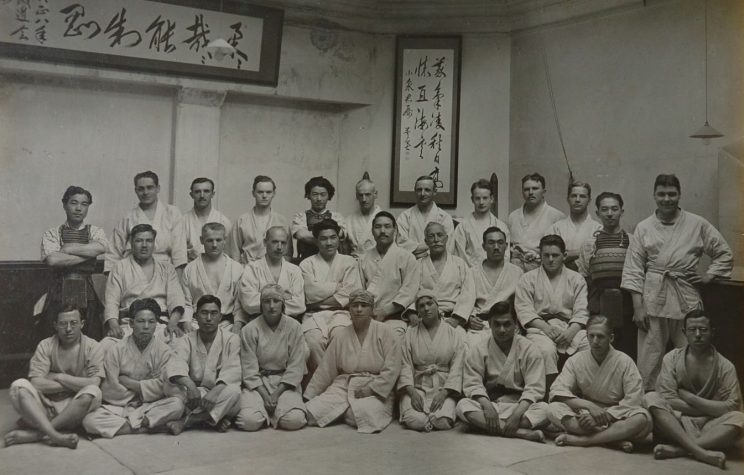 Members of the Budokwai, London, 1922.
Courtesy of the University of Bath Archives & Research Collections