You are here: HomenextNewsnextPodcastsnextThe role of education in celebrating the sporting heritage of rounders

The role of education in celebrating the sporting heritage of rounders

In this episode, recorded for the Sporting Heritage of Disability and Women’s Sports project, Rhian Lilley, Director of Development at Rounders England, and Derek Peaple, education lead at Sporting Heritage, explain how they collaborated on educational resources that promote the heritage, accessibility and values of rounders – a sport many of us played at school, youth clubs, cubs or brownies – in educational settings.

The episode also includes a short excerpt from the Sporting Heritage ‘In Conversation’ interview with Dana Abdulkarim, a Sporting Heritage Ambassador and the first ever Hijabi Muslim to represent England at any sport – with 67 caps for Rounders England – as well as being a captain and coach of various England sides throughout her rounders career.
In Conversation with Dana Abdulkarim 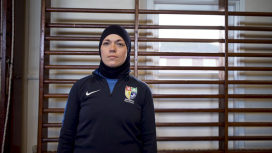 The educational resources are available on the Rounders England website: www.roundersengland.co.uk.

If you are a national governing body of sport and would like to explore a similar educational collaboration you can contact Derek Peaple directly via education@sportingheritage.org.uk and be sure to visit our Education page for more ideas.

This episode was recorded by our podcaster-in-residence Russell Todd: