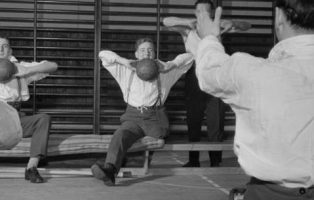 Created to coincide with the 4th Invictus Games in Sydney 2018, ‘Fit for Life: Sports Rehabilitation & the Armed Forces‘ highlights how playing sport has helped individual’s recovery over the last century. The use of sport as rehabilitation has a long history, primarily aiming to keep soldiers fighting fit and send the ‘walking wounded’ back to the front. The horrors of the First World War and the Second World War elicited an unprecedented response to rehabilitation looking instead to improve the civilian life of disabled servicemen. Sport, and physical therapy, became an integral activity seen not only to strengthen the body, but the mind, allowing service people to forget their wounds, even if only for a while. The growth of the Paralympics, and most recently, the Invictus Games, highlights the power of sport to inspire recovery and generate respect for those living with disabilities.