You are here: Home>Blog>Opening of the National Paralympic Heritage Centre 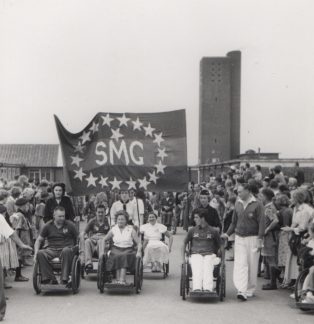 Telling the story of the Paralympic Movement, the Heritage Centre showcases objects, documents and memorabilia including tickets, medals, sports kit, photographs and programmes that were previously held in storage and not available to the general public. The Heritage Centre also incorporates interactive displays, videos and a handling collection, highlighting sports unique to the Paralympics such as goalball and boccia.

The Paralympic Movement began in the late 1940s at Stoke Mandeville Hospital where Professor Sir Ludwig Guttmann encouraged wounded veterans to play sport as an aid to rehabilitation from spinal injury. This led to local competitions, to the Stoke Mandeville Games and to the Paralympic Games which today attracts international support and a global broadcast audience of more than 4 billion.

The National Paralympic Heritage Centre will celebrate and explore this unique history. The displays illustrate the determination, sportsmanship and vision that gave the world the Paralympic Games including: