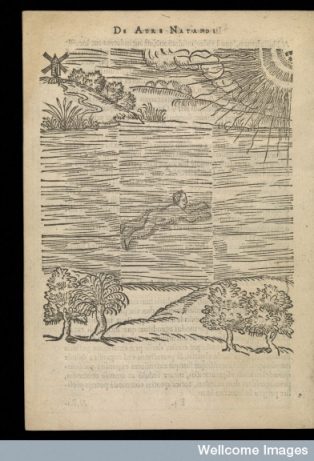 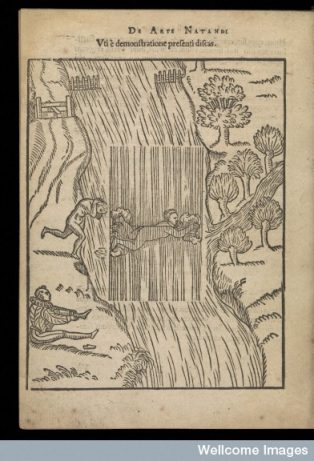 In recent Olympics, Team GB has had high hopes of medal success. As a result, we’ve dived into our collections and pulled from their depths one of the most influential works on swimming ever written.

Published in 1587, De Arte Natandi (“The Art of Swimming”) is the first swimming treatise published by someone from these islands. It was written by Everard Digby, a Cambridge Don more noted by his contemporaries for a number of theological works.

De Arte Natandi is a tremendously important book in the history of swimming.  Albeit a short work, the first half of the book covers the theory of swimming; the second half, techniques.  Aided by over 40 woodcuts, listed are over forty different strokes and manoeuvres described “more methodically than anyone else had ever done”1.

The work is alive to the dangers of swimming outdoors: Digby makes careful note of the safest methods of entering rivers, warning against jumping in feet first (particularly if the water has a muddy bottom to which your feet would stick) and advocating a slow and patient entry.  Swimmers are also advised to have a companion with them, to help if they get into difficulties.  Digby also advises on the different kinds of water that can be swum in, advising against swimming in murky ponds (in which animals may have been washed).

Digby sees swimming as something natural to humans, arguing that man excels in the water over all the other beasts (and so fits with the prevailing view that man’s place was at the head of the great chain of being).  Digby doesn’t discuss group swimming nor racing and rather sees swimming as a rather solitary exercise.  With this focus – and particularly with its depiction of swimming in rivers – one can perhaps see Digby as a forerunner of the late writer and wild swimmer Roger Deakin (author of Waterlog: A Swimmer’s Journey Through Britain).

Through highlighting the dangers of entering the water, Digby’s book is particularly relevant in light of recent research into the large number of deaths from drowning in Tudor England (as explored in recent article in BBC History Magazine2).  In some ways, De Arte Natandi is as much safety manual as exercise guide.

It has been argued that Digby saw himself with De Arte Natandi writing a canonical work: perhaps seeing himself as the Hippocrates or Galen of swimming.  Digby’s work greatly influenced what’s seen as the two most important English and French titles on swimming in the 17th Century, so much so that the author of Digby’s Dictionary of National Biography entry claims that he “may be said to have influenced the understanding and teaching of swimming for the next 200 years”.

So, when July rolls around and we ready ourselves to cheer Rebecca Adlington and co diving into the uniform and clear waters of the Olympic Aquatics Centre, remember De Arte Natandi and spare a thought for Everard Digby carefully stepping into the rivers of Tudor England and performing some of the  manoeuvres illustrated in this book.

All the illustrations from De Arte Natandi are available on Wellcome Images.  Search for the work here or click on the thumbnails from its record in the Wellcome Library catalogue.