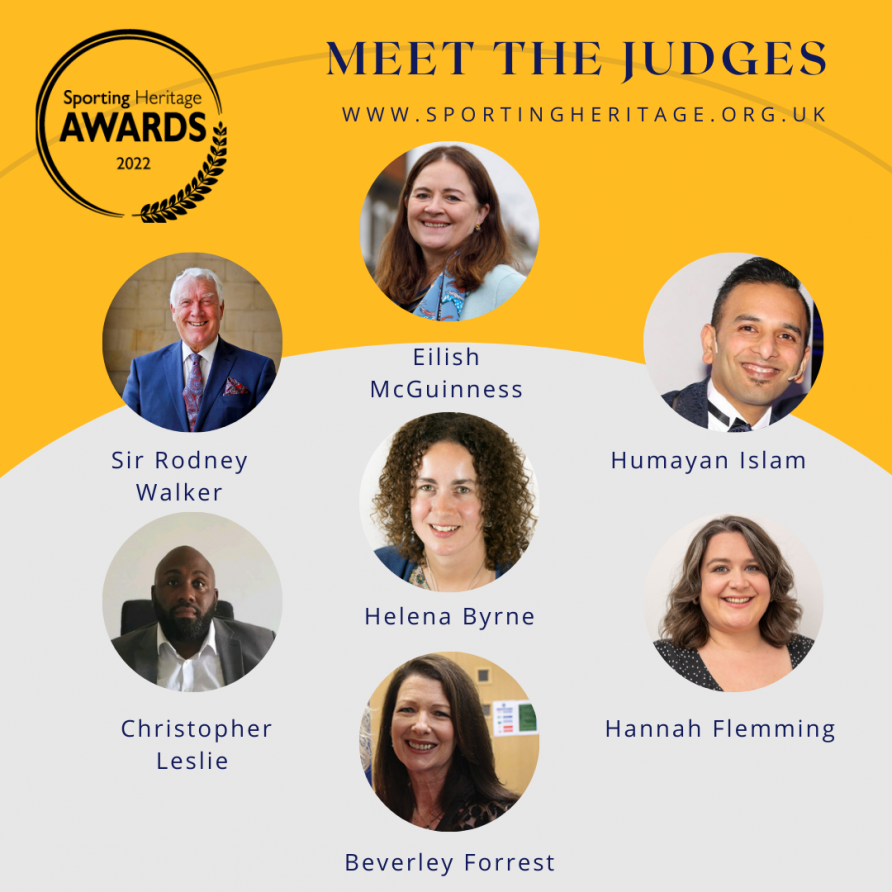 Our Sporting Heritage Awards 2022 judging panel decided the winners based on the details and evidence demonstrated.

Our panel came from across the fields of sport and heritage and we are delighted to have them working with us on this amazing programme.

Eilish has worked in heritage all her professional life and has extensive experience across the sector and the breadth of the UK’s heritage. She joined the National Lottery Heritage Fund in 1996 where she has held a variety of roles, both operational and strategic. Before taking up her current role as CEO in January 2022, she was Executive Director of Business Delivery.

Eilish’s department has been among many staff at the Heritage Fund working at the frontline with heritage organisations to support them through the pandemic. From the start of the pandemic, until the end of this financial year, the fund will have invested around £675million, about £100m more than we would have invested in the same period normally. This has provided vital support to heritage organisations. Eilish has a strong commitment to the power of heritage to support communities, strengthen economies and to change lives. Eilish has a degree in History of Art and Archaeology from University College Dublin, and an MA from Queen’s University Belfast, where she was a junior research fellow in the Institute of Irish Studies. She has also worked in the heritage sector in Ireland, Northern Ireland and Scotland.

Sir Rodney Walker is known for being a huge supporter and leading figure in the world of sport.  He is the current Chairman of the British Basketball League, Trustee of the London Marathon Charitable Trust, a Trustee of the Wembley National Stadium Trust, Vice President of the Youth Charter for Sport and Vice President of the Federation of Disability Sports Organisations.

Humayun has worked in a number of different fields ranging from mental health, supporting accommodation, Male Domestic Abuse Service & most recently working as the Chief Executive of BEAP Community Partnership.

Humayun currently works as the Chief Executive of BEAP Community Partnership in Bradford.

Helena Byrne is the Curator of Web Archives at the British Library. As part of this role she has co-curated the UK Web Archive sports collections with colleagues from the National Library of Scotland and the National Library of Wales. She was also the Lead Curator on the International Internet Preservation Consortium (IIPC) Content Development Group 2022, 2018 and 2016 Olympic and Paralympic collections as well as the National Olympic and Paralympic Committees collection. Helena completed her Masters in Library and Information Studies at University College Dublin, Ireland in 2015. Previously she worked as an English language teacher in Turkey, South Korea and Ireland. Helena is also an independent researcher that focuses on the history of women’s football in Ireland. Her previous publications cover both web archives and sports history.

Christopher is a Director of Inside Out Wales, A Trustee of the Hardman Trust, and a current scholar at the Longford Trust. Using his lived experience from within the justice system, Christopher works to support others to effect similar change and progress through their reform journey. Christopher is an experienced Director and entrepreneur with a demonstrated history of working in the non-profit organisation management industry.

Having worked extensively within the criminal justice system, Christopher has witnessed the impact of sport on health and well-being, also its fundamental importance on desistance of crime. With an in-depth knowledge of both the criminal justice system and how education and sport can impact reform, Christopher brings a wealth of knowledge, expertise, and lived experience to the judging panel.

Hannah has been working at the World Golf Museum in St Andrews, Scotland since graduating from the University of St Andrews in 2005. During that time I have worked in Visitor Services, as part of the Curatorial team and am now responsible for leading the museum’s learning programmes. Hannah’s appreciation for Sporting Heritage and golf specifically has grown through speaking to visitors and those passionate about the sport and its heritage. Creating a space for people to feel connected to the collections and share their stories is her main priority.  Projects such as Golf Memories, The Neurodiverse Museum and delivering a ground-breaking Sporting Heritage CDP PhD programme has enabled the museum to have meaningful engagement with new audiences.

Bev studied history at Hull University and went on to teach history in secondary schools for a number of years. She then decided on a career change and taught in primary schools. More recently she trained primary teachers at Leeds Trinity University. Bev is a long-standing member of the Historical Association primary committee and is also a member of the editorial board for Primary History Journal. She is also an HA Trustee. She established and organises the popular Northern History Forum based in Leeds. She is a quality mark assessor for the Historical Association. Bev enjoys presenting to teachers at conferences and is also a frequent contributor to a number of publications. Her main areas of interest are museum education and exploring links between history and wider society – where sporting heritage comes in!

In 2015 she was awarded an Honorary Fellowship by the Historical Association.